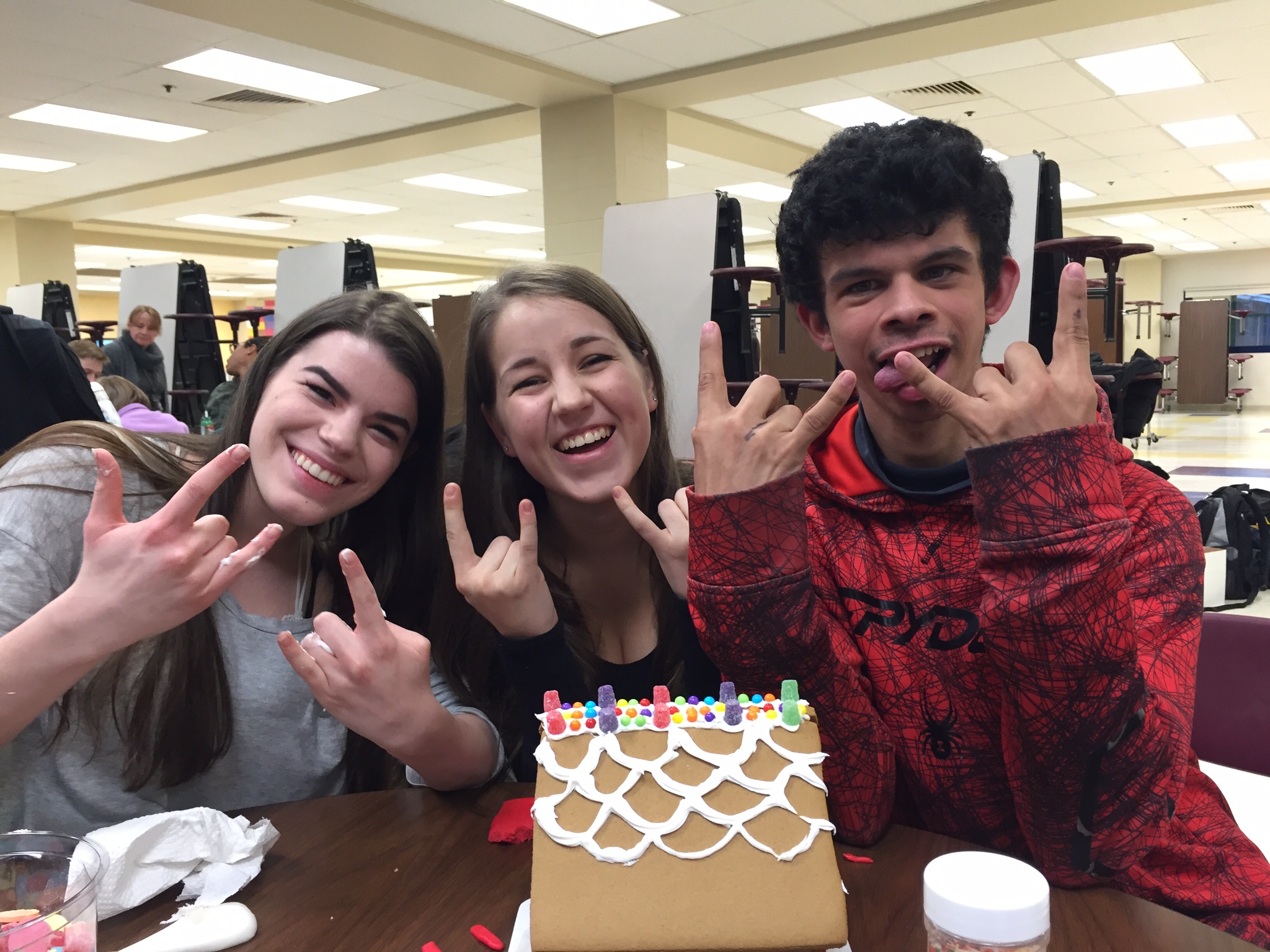 ARHS’s Best Buddies club, is a local chapter of a global organization aimed at “ending the social, physical, and economic isolation of the 200 million people with intellectual and developmental disabilities,” according to bestbuddies.org.

Co-presidents of the Amherst chapter, juniors Libby McLaughlin and Katie McCarthy, are in charge of planning both meetings and events for the club to enjoy. “I want people to know that it’s a lot of fun,” said McCarthy.

Best Buddies hosted the Best Buddies prom on Friday, April 1. The event was held at Dupont Middle School in Chicopee, and attended by members of several Best Buddies chapters in Western Massachusetts.

“I liked dancing at prom. It was colorful!” said Jacob Demling, a member of Best Buddies. For Ethan Floquet, the best part was “getting dressed and the food at prom,” he said.

The theme of the prom was “Under the Sea.” As Maria Wehrli, a member of two years, described the event: “It was just like any prom. We danced and ate food.”

“The point of Best Buddies is to allow developmentally delayed students to experience activities that typically developing students are able to do with regularity,” said Tracy McNaughton, the adult advisor of the club and the director of the Pathways to Independence Program (PIP)  at ARHS.

McLaughlin, a member since seventh grade, takes this message to heart. “The IDD (intellectually and developmentally delayed) students are separated from us,” said McLaughlin. “I made a bunch of friends [in Best Buddies] that I wouldn’t have otherwise met and I am so happy I did.”

McLaughlin’s twin sister Caroline is also a member of the club. “Terry Mascis is one of my best friends, but I probably wouldn’t have met her if I hadn’t joined,” she said.

In addition to the prom, three more events took place in April. The annual Best Buddies Fashion Show was held on Thursday, April 14 at Thornes Market in Northampton. “Different clothing stores and boutiques have fittings with the kids so they have an outfit to showcase in the show,” Ms. McNaughton said.

April 29 was the “Spread the Word to End the Word” campaign. Students had to recite a pledge, promising to never use the word “retarded” again. Those who pledged received a cupcake decorated by the Best Buddies Members.

On April 30 was the annual Best Buddies Friendship walk in Northampton. The walk is the main fundraising event for all Best Buddies chapters across the country.

“The Friendship Walk is how chapters raise money,” McLaughlin said. “People get pledges for participating in the walk, and if you raise over 50 dollars you get a t-shirt.”

Fundraising and activism aren’t the only Best Buddies activities. Meetings are held twice a month in the PIP room, unless the club has an out-of-school activity planned.

“We do things like cookie decorating and bowling and during meetings at the school we eat food and dance,” said McCarthy.

Both McLaughlin and McCarthy along with Ms. McNaughton stress that “anyone can join.”

McLaughlin fears that students at ARHS think it’s a big time commitment. “Anyone is encouraged to join,” she said. “It’s laid back and just so much fun.”

In regards to the word “Buddies” in Best Buddies, a buddy is a typically developing student who is paired with a developmentally delayed student. “The goal is that they will find things in common and help each other grow,” Ms. McNaughton said, “because it goes both ways.” There are about 15 buddy pairs but a handful of typically developing students also attend meetings and events as associate members.

Buddy pairs try to spend time together about twice a month and also call and text each other. “I text my buddy every day and we talk about how our days went,” said McCarthy.

Jalil Cruz and his buddy Alex Perry have a lot of fun together. “I go to the movies outside of school with my buddy Alex Perry,” said Cruz. “I also like meeting new people.” Cruz is described by his teachers in the PIP room as a “social butterfly.”

Christina Kiely also enjoys her time with her buddy Kelly Ford. “I like to go out to restaurants [with Kelly],” Kiely said. “We talk about our days.”

The students involved in Best Buddies are passionate about the club. “It’s not community service, it’s about friendship and fun,” said McLaughlin. “I am so proud of my chapter because I think we are enthusiastic and close, and I love it.”

Mason Glennon, who has been in the club since seventh grade, had only positive things to say. “I like being in the club, I have lots of friends,” he said.