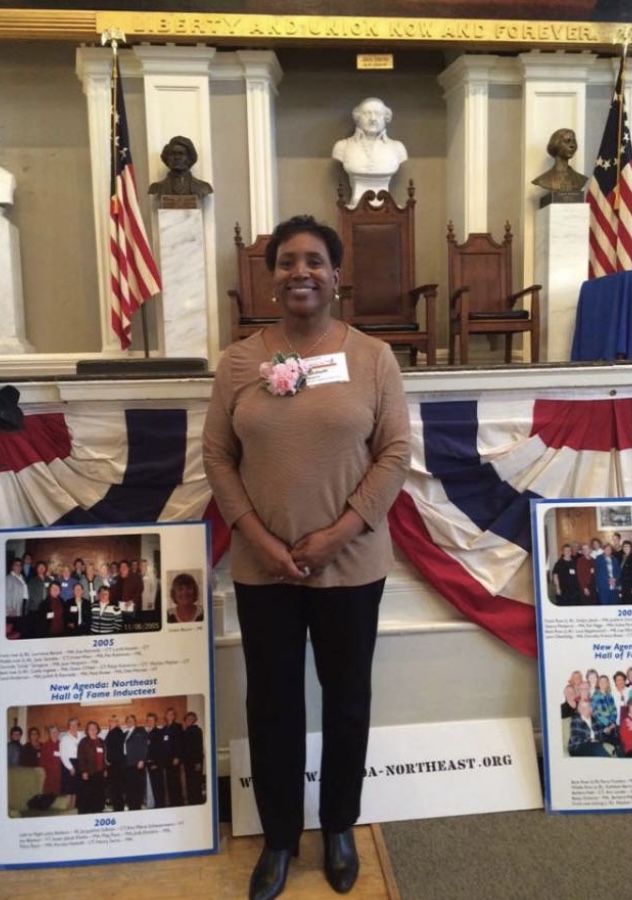 It’s a sunny day on the track. PE teacher Elizabeth Haygood is in her yellow official’s jacket corralling athletes into their heats and lanes. That’s her job. But she also goes above and beyond, supporting athletes on every team in so many ways that go unseen.

Now Haygood, a pillar of the Amherst Regional High School community, is retiring—or “graduating,” with the class of 2021.

Haygood began her work at the high school in 1998 as an interim physical education teacher and then was offered a full-time position at the end of that year.

From there she went on to become the Activities Coordinator, as well as the co-advisor to People of Color United (POCU) alongside Dean of Students Mary Custard. “I had [former principal Mark] Jackson convinced I had a bed in the back because I was here so much,” Haygood said.

She has also been a class advisor for many classes, starting with the freshman class in 1999. “There was no handbook,” she said, “when I stopped [advising that class when they graduated] in 2003, I then wrote the handbook on class advising.”

Haygood was also the head coach for the track and field team at the high school. The coaches used to officiate meets, and Haygood realized she was good at it. When she stopped head coaching she moved almost entirely to officiating and is now nationally acclaimed.

Haygood has a very maternal presence within the school, though few would call her soft. “I had a lot of people help me with my kids,” she said, “so it was important to me to be there for other kids.”

Haygood is not the only person who sees this reality within our town. “In my 25 years of working here I have not seen the district increase the number of people of color in professional positions,” said Custard. “That saddens me and that affects me.”

“One of the things I’m most proud of is being a part of POCU and allowing the students of color to experience things that they may not be able to experience,” Haygood said.

Senior Monica Cage, the president of POCU this year, said the group provided safety, community, and inspiration. “Being in school you might not see everyone that’s in POCU [every day],” she said, but when students gather for the club, “it just brings you back home.” For her the best parts of POCU are that “ you can just be yourself, and that’s celebrated.”

When Cage’s dad had a difficult surgery and her grandmother died at the beginning of the Covid-19 pandemic, Haygood showed up. “I remember her actually going out of her way to check up on me face to face,” she said. “She didn’t have to do that.”

Countless students reported Haygood’s same willingness to go above and beyond. She once had a student who wasn’t going to go to prom because he didn’t have a suit or tux, and she said, “Oh no, that’s not going to stop you. [I] drove him to Gentleman’s Warehouse, we got the tux, he went to the prom happy as a pig in shit.”

Though Haygood admits that some view her as a “hardass,”  she wants people to “know what the rules are,” and that even if they don’t always follow the rules, she’ll “love you regardless,” she said.

“I always want people to have the gift of clarity,” Haygood added. “And I will do anything to help you succeed.”

Most people have been yelled at by Haygood at least once during their time at ARHS, but what they may not know is that she does not hold grudges. “You can piss me the hell off today, but tomorrow is a new day,” she said. “I don’t care about yesterday.”

As she walks away from ARHS she definitely is not walking away from her social justice work in Amherst. “Some people are trying to get me to run for town council but I happen to like my position on the Human Rights Commission,” she said

Haygood’s retirement will be felt deeply by the ARHS school community, and especially by her colleagues of color. “As one of the very few other black women working in our building, I will feel that loss very personally and professionally,” said Custard. “I think she’s left a wonderful legacy, and I know she’ll pop in and out.”

Haygood also plans to continue to participate in the Amherst Area Gospel Choir and to spend time with her beloved two-year-old and one-year-old grandchildren.