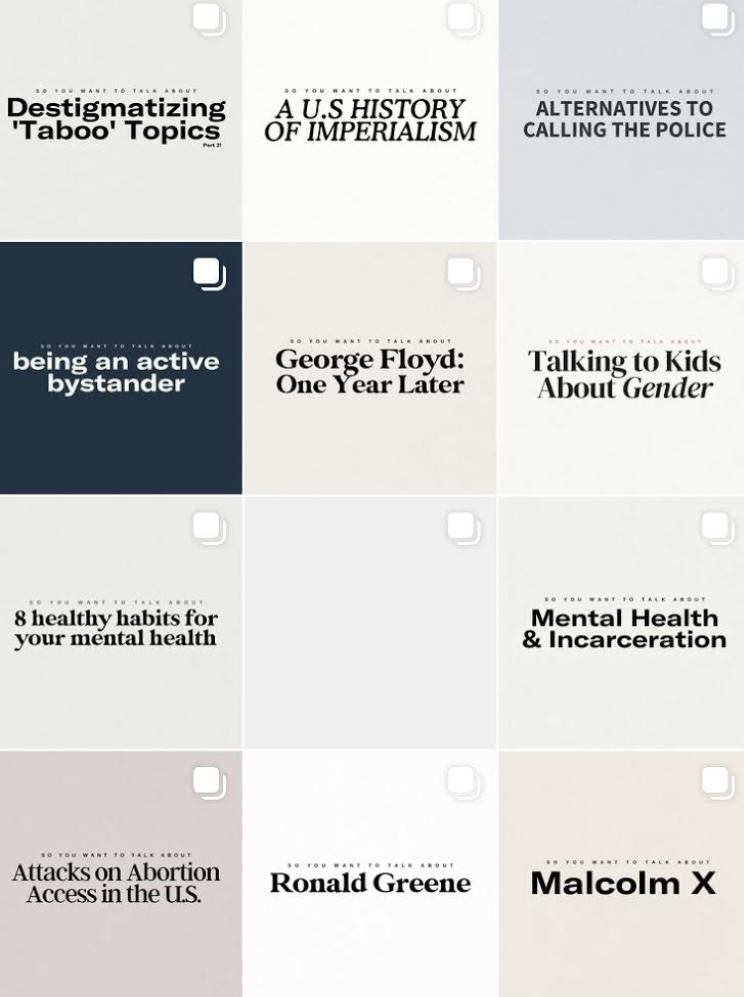 Anybody using Instagram this past summer during uprisings for racial justice in the wake of George Floyd’s death probably knows what a social justice infographic looks like.

If not, check out the site’s @soyouwanttotalkabout page, which will instantly pull up a slew of educational infographics on everything from  Black Lives Matter, A U.S History of Imperialism, Attacks on Abortion Access in the U.S, What you can do to Support Palestinians, Qualified Immunity, Anti-Asian Hate, Gaslighting, and much more.

Hundreds of thousands of these infographics circulate at a time, on topics as broad as a century-long movement, to ones as narrow as the definition of a word, and many students at ARHS re-post these infographics on their Instagram stories.

Are these posts effective activism? Or do they induce apathy and oversimplify issues?

The goal of social justice infographics is to disseminate information to as many people as possible, and therefore to be shared as widely as possible over the internet.

To do this, posts utilize techniques traditionally used in search engine optimization and clickbait. A Medium article written in 2020 on the science behind Instagram infographics details how they “consist of numbered lists, use questions as headings, lean heavily on definitions, employ the imperative voice frequently, and encourage you to consume more of their content with arrows guiding you through each post.”

There is also a style uniformity among these posts that coincides with the online advertising strategies of many brands. According to Vox writer Terry Nguyen, the posts have soothing color palettes or simple images with large minimalistic text in the center—think Glossier beauty or Casper mattresses.

The visually appealing graphic might seem discordant with the heavy topics posts explore, but on a cognitive level, this kind of image makes it easier to influence an audience into agreement.

According to a study conducted by Project Hope, a global health nonprofit, almost 50% of the brain is devoted to visual processing, and that the human brain is capable of understanding a visual scene or image in less than one-tenth of a second. That means that an infographic is far easier to digest than paragraphs of text, or non-visual data.

Vox writer Terry Nguyen also warns that the uniformity of style “could give posts that have been poorly written and shoddily researched an air of false legitimacy.”

These social justice slideshows are not only easy to make, but they also typically forgo sourcing, and it can be difficult to find out the exact person or organization behind their creation. Posts with false information, extreme bias, or incomplete data visualization also gain a false air legitimacy if an Instagram user sees that they have been widely shared.

Senior Ian Juras thinks that because of this danger, receiving news or information through Instagram—particularly through these graphics—is a bad idea. “I have a couple of news apps on my phone that I get headlines from, and I read newspaper articles online,” he said. “I think it’s dangerous to fall into the trap of getting your news from Instagram where the infographics are typically made by unqualified or heavily biased people and are often left un-sourced.”

Sophomore Lucia Lopez is also careful. “I am pretty skeptical when I see these posts because I know a lot of big activist accounts are shady. For example, the ‘Feminist’ account is run by two businessmen,” she said. “I think people usually choose to post certain infographics based on how ‘professional’ they look.”

Along with Juras and Lopez, juniors Veda Harvey-Ahmai and Anna Lee, and senior Sammy Conrad-Rooney admitted that they do not typically look at sourcing for these posts.

“[Infographics are] the perfect vessel for unreliable information since they are made by random people with sources that aren’t very easy to find. I have never looked at an infographic source and I spend way too long switching between Instagram and Safari trying to type out the name of an article a post referenced,” said Conrad-Rooney.

Another danger is the oversimplification of issues. The format of infographics and the kinds of posts that perform best on the Instagram algorithm lead issues, events, and ideas to be condensed to a slogan or headline, often misrepresenting them.

You have to be careful,” Lopez said. “A lot of times things are too broad to be posted without any sort of explanation from either the creator or the Instagram user.”

Conrad-Rooney added an example of the danger of infographics when he came across a post on anti-Semitism.

“It was about what anti-Semitism is and isn’t, and there were clear problems with the infographic because much of it seemed to be the opinions of the creator, who then acted as if they were speaking for all Jews with their universal laws of anti-Semitism,” he said. “As soon as one person posted this infographic, I saw it pop up throughout the day on other stories, including stories of people who aren’t Jewish but had the urge to share their newly-learned and faulty anti-Semitism essentials.”

All of the ARHS students interviewed mentioned that there was significant social pressure to repost these infographics on their Instagram stories especially during certain time periods. “I know people who really feel that,” said Harvey-Ahmai. “But sometimes pressure can be good because people need to be pushed out of their comfort zone. Just because they’re not affected by an issue doesn’t mean it’s not happening.”

Lopez recalled that when anti-sexual harassment infographics were going around after the murder of Sarah Everard, peers who she knew sexually harassed women reposted the infographics.“It was obviously performative,” she said.

Juras was more negative about these posts. “I think infographics fall into a category of ‘performative activism,’ a way for people to very publicly say ‘Hey, look at me! I care!’” he said. “The act of resharing a post in cutesy colors and a fun font that says something like ‘Why the Police are Bad :(‘ doesn’t actually do… anything.

Juras chooses not to share infographics “because I like to reserve my activism to making direct donations to businesses run by people of color, supporting the music and/or art of BIPOC artists or composers, or donating to nonprofit organizations. These actions can go unseen and I don’t need to brag to my friends that I am an ally,” he said.

Conrad-Rooney had a similar outlook on the social justice effectiveness of these posts. “First, it divorces education from actual action. People constantly post infographics on their Instagram stories and likely believe they are taking action against some injustice by bringing awareness to the topic,” he said. “In reality, most people don’t have time to read dozens of infographics every single day and will just click past.”

According to Conrad-Rooney, flooding Instagram with infographics “whenever some event occurs and then having that event be forgotten when the 24 hour stories expire is not meaningful action.”

Instead, he believes that long-lasting change is not “made by masses of people clicking a paper airplane icon.” Meanwhile, Conrad-Rooney is a member of our community’s Democratic Socialist of America groups and has spent hours phone banking and text banking for progressive causes in Massachusetts.

Even those who criticized the infographics though were not wholly in opposition to them. Almost all students interviewed thought there were obvious benefits to reposting these infographics. “I definitely learn a lot through seeing what other people post and posting myself. The infographics strike up conversations in person, and it’s been really helpful for me personally,” said Lee.

Instagram infographics can also amplify marginalized voices that aren’t represented in normal media outlets. Especially for controversial topics, infographics give people the opportunity to widely share an opinion that may not be mainstream. Some infographics have catalyzed meaningful action.

Crowdfunding and mutual aid posts have resulted in increased donations. Activist email and phone-call templates have had a particular impact on small towns and cities who find themselves deluged with citizens advocating for budget redistribution, especially concerning police.

For these reasons, Harvey-Ahmai also has a net positive view.

“As a person of color I feel supported [by lots of white people posting BLM infographics], and it makes me feel good that they aren’t just brushing by on it,” she said.

“While I know my close friends are super supportive, it’s nice to hear that from people who I’m not so close to,” she added. “[In terms of posting] you’d be surprised at the amount of people who don’t know about things at all. If only two of my followers haven’t seen this particular great infographic before, there’s still a gain in me posting it.”