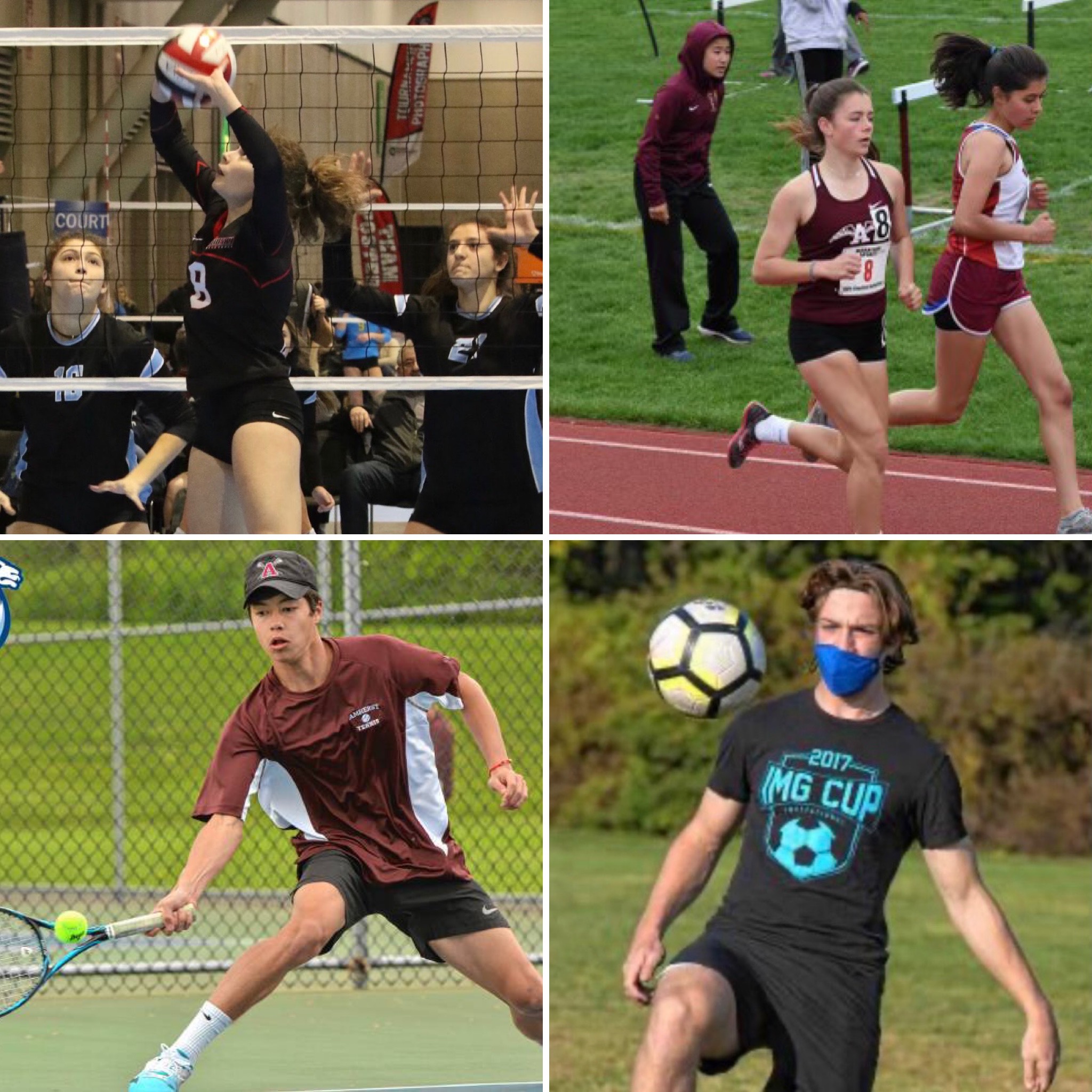 During the pandemic, students were forced to adjust to a lot of changes during virtual schooling, some for the better and some for the worse. But how did athletes fare?

I reached out to four ARHS seniors–Maddie Shea, who plans to run cross country and track in college; James Serhant, who has committed to playing tennis at Connecticut College; Amelia Beigel who will be a setter on the volleyball team at Endicott College, and Evan Perry, who plans to play soccer at Union College.

They spoke about the challenges with changes to their sports last year and this year, recruiting, and choosing a college during a full year of remote learning.

For Serhant and Shea, last year’s spring was a big disappointment. Tennis was canceled due to COVID, as was track and field. However, they and other athletes still interacted with recruiters, albeit differently.

Choosing where to apply was difficult for Shea. “I wasn’t able to travel and visit schools out of New England because of the pandemic,” she said.

As a result, Shea became more apt to stay closer to home during college because of the chance of the pandemic getting worse. “I didn’t want to be far from my family and be stuck across the country if there was a sudden spike in cases again,” she said.

Luckily, she said, the pandemic didn’t affect track or cross country recruitment that much, since “both track and cross country are individually led team sports.”

“Coaches can easily look up a player’s name and see their personal records/times and see how your team did overall,” she added.

Shea is mulling over attending Wheaton College and Saint Anselm College, where she hopes to run cross country and participate in the mile, two-mile, and thousand-meter races on track.

Serhant stated that, strangely enough, the pandemic made it easier to be recruited. “I just had to email coaches and send them a tennis recruiting video,” he said.

Similar to cross country and track, tennis is an individual team sport where coaches can look up your stats as a player individually and see your talents there.

One downside to this form of recruitment, however, was that he “couldn’t visit anywhere or meet any coaches face to face.”

Serhant had a few other schools interested in him for admission to their tennis team but he chose Connecticut College because he wanted to play tennis for a NESCAC school.

Due to the pandemic, Beigel’s club volleyball team saw limited to no exposure to college recruiters or games in general up until mid-June. They were planning to play in a relatively small tournament in Boston during the summer, which she said “was better than having no tournaments at all,” but unfortunately it didn’t end up happening and was very disappointing.

Additionally, once the fall rolled around, their season was radically changed by playing outdoors on the grass fields rather than indoors. They also only hosted one game for their senior night. Although they were able to play inside a gym for away games, Beigel said “practicing outside every day with wind, rain, and the sun in our eyes was very discouraging and unmotivating at times.”

Travel restrictions also made exploring her options for a “post-high-school career really difficult.”

Beigel, a senior captain for the ARHS volleyball team, decided to play at Endicott College as a setter. “Even before Covid I was going back and forth between wanting to stay in New England closer to home or go far away,” she said.

Ultimately, she liked the aspects of being close to Boston, near a beach, and being able to play with her friends from her club team that are also athletes on the Endicott volleyball team. For college volleyball, there is an average of 4-6 players added to the team each year, but this year Endicott has only added 3 so far.

Perry, a senior and captain of the varsity soccer team agreed that “Covid completely messed up recruiting.”

“I was originally looking at three specific colleges to do overnights, camps, and clinics for coaches to see me play,” Perry said. “Once Covid hit, all of them got canceled. It definitely made me and my other club teammates think about doing a [post-grad year].”

PG athletes have a chance to take on an extra year of schooling at a private high school where they can get their grades up while improving sports skills so that higher division schools will consider them.

Perry ultimately decided against that and instead chose to play at Union College because he had a positive meeting with the coach and also recommendations from a friend who also plays for Union soccer.

Because of Perry’s range of friends on his club soccer team and knowledge of college sports, he learned that many Division III schools only took about three new players, which is much lower than the average.

“D1 soccer teams didn’t get affected too much because many players had already committed in spring of their junior year,” he said.

“If Covid hadn’t happened, I probably would have committed sooner,” reflected Beigel. “I would have had more opportunities to see and interact with college coaches at my club tournaments.”

However, all athletes agreed that despite the trouble they faced, they are thrilled that vaccination will lead to not just a more normal college experience but a heightened athletic one.