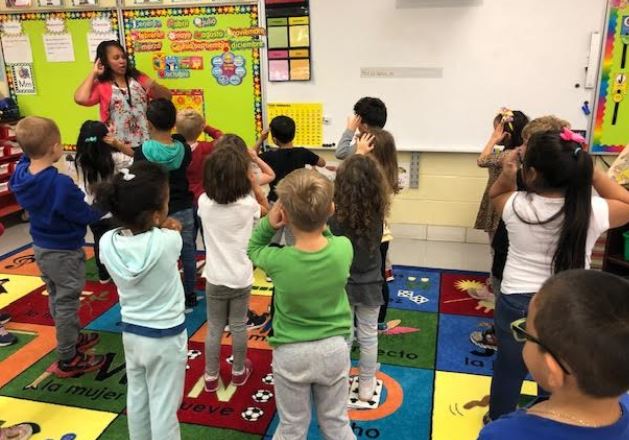 On October 1, a rainy Tuesday, while sitting in English class, a group of kindergarteners burst into song. However, they were all singing in Spanish, with smiles on their faces.

Fort River Elementary School opened a new dual language kindergarten this year, and many families enrolled their children hopeful that what happened that morning would occur regularly: students would become fluent in two languages at the same time and move between them, joyfully and effortlessly.

Early this fall, students were learning about community, reading books such as Helpers in Your Neighborhood, We Found a Hat, You and Me together, If You Plant a Seed, and Responsible and Respectful.

Deborah Felix is one of the teachers in the English classroom for the kindergarten. When I visited, her classroom was engaged in an activity in which they built communities by drawing people and houses. Some kids were drawing self portraits.

“When did you get a tattoo?” Felix asked one of the kids after seeing his creative addition of an  image on his neck that is not there in real life.

Soon after commenting on students’ drawings and circulating through the room,  Felix told the kids to clean up because it was time for SuperKids, and much excitement followed.

“SuperKids!” a few stated with glee, hurrying to clean up and move to their spots on the classroom carpet.  That day’s SuperKids lesson was about different animal names and how to draw animals. The lesson was called “Oswald” and the kids sang along to the tune.

They also drew animals using letters. That day’s animal was a monkey using O’s and C’s.

After this lesson the kids cleaned up and headed out for library time, before moving to their Spanish classroom, which on that day was more mellow than the English classroom, with teacher Amnerys Cuevas’  lesson focused on counting and addition, all in Spanish. Students used five tiles with two different colored sides.

One side was red and the other was white, and ultimately they learned how different arrangements of numbers can all add up to five in total.

After this lesson there was a counting song, and the kids gathered on the front carpet to all sing. Most kids sang along, counting up to twenty in Spanish, using different scenarios.

While some of the kids in Cuevas’s class are not yet able to speak Spanish, she does not allow English to be used in her class. If they ask a question in English she responds warmly in Spanish in order to help them learn.

While this program might be different from most kindergartens, the kids still are “excited about learning.”

Felix is thrilled with the model and said she hopes to foster “a universal view of the world” and reach an often underserved portion of the community in this dual language class.

She also hopes that this program will inspire “a love of learning of other countries besides the U.S. and create a community that honors and respects kids’ heritages.”

Felix saw a large change in the amount of kids that speak their native language at school. Now, Spanish speaking students are “proud of it” rather than embarrassed like before. And students “honor their peers that are native Spanish speakers now,” she added.

According to many studies, being raised bilingual not only creates greater language fluency, it is also beneficial to  brain development.

Felix’s class participated in Puerto Rico Day on the Amherst Town Common in September, where her kids sang in Spanish.

“It was a new experience and nice to do it,” she said. “The kids are all sweet and loving and seem really happy to be in this program, including the English speakers.”

“The addition of this new program has been exciting,” Felix said “a lot of kids break out singing in Spanish during English class.”

Not only is this program great for the students in it, it has the potential “to change the look and feel of the school,” she said.

Fort River Principal Diane Chamberlain said she is especially glad that the program will propel “students who use Spanish as their only or primary language at home” forward in a more inclusive environment.

But she is also grateful the program allows the school to “look at all students as language learners.”

Chamberlain said the school has “already adjusted instructional practices with this mindset, using a multi-tiered system of support. Fort River is a school in which all students need direct and explicit instruction in the complexities of language, now two languages.”

At Fort River, now more than ever before, “multilingualism is a gift,” she said.