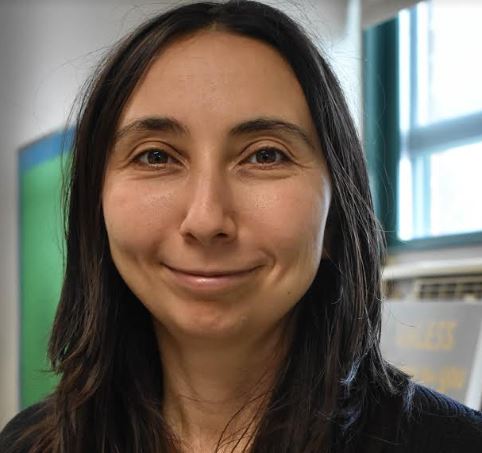 Between finding her Intentional Living community in Shutesbury, being close to her friends and family in Boston and New York City, and landing her brand new ELL teaching job at ARHS, Alla Azrilyan gushed that “all my dreams came true at the same time.”

Azrilyan explains the ELL program here at ARHS as “so vital” because it teaches students with different language backgrounds how to read and speak English while integrating them into other courses.

She has a master’s degree to teach middle school level science, but chose ELL because “kids really need it. You might not need science in your life but English is always useful,” she said.

Azrilyan believes her role at the school is very important because “coming into school is such a sacred time for these students that are busy and working full time,” she said. She strives to provide a safe learning space for Students with Limited or Interrupted Formal Education (SLIFE).

Azrilyan said “they learn everything automatically, it’s not about that. It’s about creating a culture of acceptance and making students comfortable enough that they want to talk to you.”

Azrilyan grew up in Russia, where she spoke Russian and learned Ukranian in school. It wasn’t until moving to the United States for high school that she became fluent in English. “[The US] feels like home now,” she said. Throughout her ELL teaching career, she has also learned “some very horrible Spanish” that she’s still proud of.

In the past, she has taught in very different school environments. First at a failing public school in Chelsea, Massachusetts that was close to government intervention, she learned how to handle large, hectic classrooms and low budgets. “In classes with 30 kids, it was very easy to cringe,” she laughed.

At a Catholic school in New York City, “it was refreshing to be able to talk about God and spirituality,” she said, “There was a lot of discussion about love and kindness.” She feels Amherst has the same kind and open attitude.

Azrilyan finds herself at ARHS not out of necessity, but purely because this is her ideal job. The previous school she worked at closed down, and she moved to the Sirius Intentional Living Community in Shutesbury and was planning to collect unemployment.

She found the job by coincidence and said she thought “Oh My God, I’m just gonna apply to this one position. I could’ve gotten money doing nothing but I would rather do this.”

During the summer, Azrilyan can be found either in Boston visiting friends, or in New York City with her family. She frequently attends Russian music and arts festivals, and was a member of five different Russian-based Eastern spirituality groups at one point.

Besides her passion for Russian arts, she is raising her three-year-old daughter. “She is the most wonderful and most horrible thing that ever happened to me,” she joked.

Inherently an extrovert, she finds herself in many different social circles. She loves the Sirius Intentional Living Community. “I live in an apartment with my boyfriend and daughter, inside a home with others, in a complex of houses with many other families,” she said.

Azrilyan has also made plenty of friends within her department here at the high school as well.

Her goals for teaching here are “student centered.” Azrilyan feels at a new school, she might take on a new teaching persona. “I was the one at the Catholic school that was strict,” she said while laughing, “but here I’m exploring more openness and communication.”

Teaching SLIFE students drew her to the job, and she said, “I feel very honored, I feel I’ve been trusted with these kids, it’s a really big struggle.” Her biggest motivator is when her students learn to read. “It’s really amazing,” she said.

Azrilyan would like to add that she is searching for anyone, but specifically toddlers and kids, that want to learn Russian.

She wants her daughter to learn the language in a social environment and would also love to teach her native language to others. To reach out to her for more information about this, email her at azrilyana@arps.org.