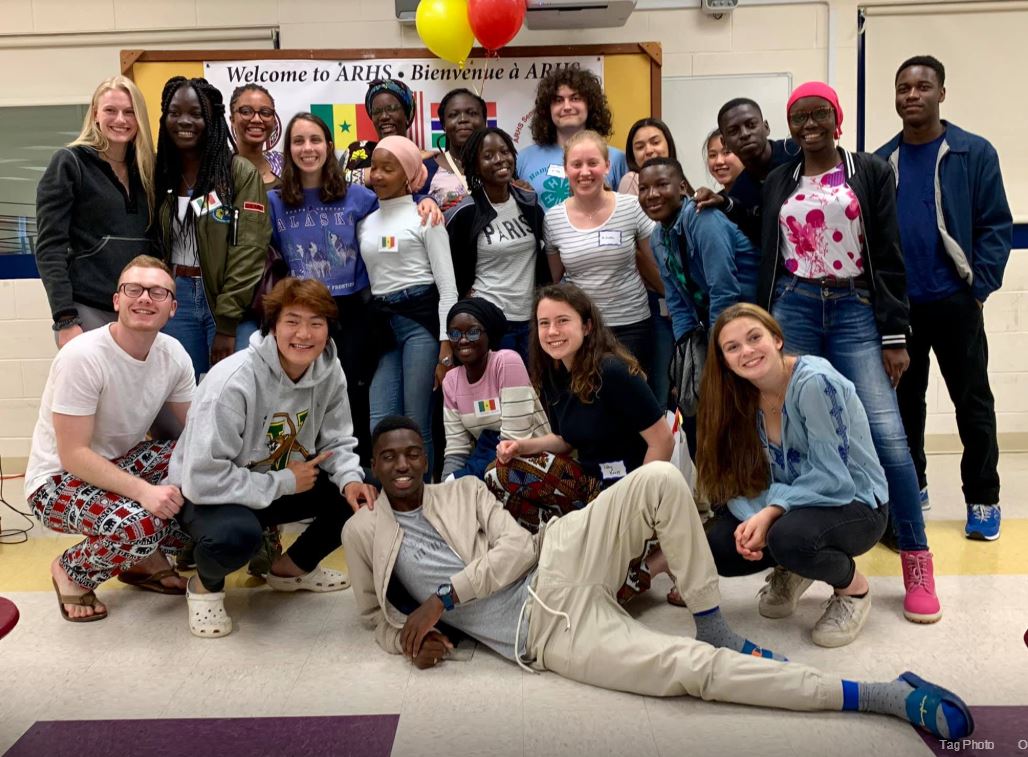 ARHS students with their visitors from Senegal and The Gambia.Photo: Mary Custard

This has been a big year for the Senegambian Scholars club at ARHS. Last February, a group of ARHS students traveled to Senegal and The Gambia for three and a half weeks for a cultural exchange.

Over soft drinks, the three teachers wondered why there wasn’t an ARHS exchange to Africa because at the time, there were three successful programs that traveled to Europe and one that went to Russia.

From there, it took many more meetings with our partner schools, Cours St. Marie in Senegal, and Sifoe Senior Secondary school in The Gambia to make their dream a reality. The ARHS principal and superintendent were supportive, as long as the trip was safe.

One exchange trip to West Africa was cancelled during the height of the ebola epidemic.

“The Senegambian Scholars Exchange Program engages students and parents as ambassadors of their respective countries in cross cultural experiences to cultivate and promote respect, understanding and appreciation between our countries,” said Mr. Sarr.

Participating in the exchange

Last year I was given the privilege to be able to travel with the club to West Africa. I stayed with two amazing families, the Soulamas in Dakar and The Camaras in Gunjur, both of whom who treated me like their own daughter and taught me about their cultures.

On top of fully submerging myself in the culture in Dakar and Gunjur, I was able to visit Goree, which was the largest slave trading center on the West African coast.

I was also able to visit the Island where Kunta Kinte was born. Both of these experiences were very emotional but they broadened my understanding of the history of slavery and how it affected these countries so horrifically.

One of Mr. Penniman’s favorite parts of the exchange this year, was the dedication of the parents and students to raise money for the Gambian students to come to the United States.

“All of the parents have been incredibly supportive and generous, helping the dream of having the Gambians come here become a reality,” he said. It took months of fundraising to gather the money for their travel expenses, personal spending money, and funds for a day trip to New York City.

After months of preparation, finally the time came and both groups arrived at ARHS. They then were welcomed into their host families’ homes. They had a wonderful stay here.

They came to ARHS a few days to attend classes, and  they visited UMass and Amherst College.

I interviewed one Senegalese student and four Gambian students to hear more about their stay here and to learn about how they got involved in the program.

Issa Touray, a senior at Gunjur High School said that it was a “complicated process” to be able to come here.

She had to be interviewed by members of TARUD (Trust Agency for Rural Development), who then picked only six students to come. She then had to have an interview to get a U.S. visa.

Touray received a call from Baai Jaabang, the head of TARUD, the morning after her interview, while she was home doing laundry with her mother.

“When I saw the call, I answered and Bai said I was lucky to be one in the first group to come to America,” she said. “I threw my phone and ran down the road, shouting and jumping, I was so excited.

Every student I interviewed from both countries found our school system to be shocking. In their countries they said the work they do in class is individual.

While visiting ARHS classes they discovered that students often collaborate in groups and engage frequently in conversations with teachers.

Touray noticed students using laptops and phones for school work, which are not allowed in their classes.

“We must leave these things at home,” she said. “If we bring them to school, they will be taken and we will never see them again.”

Foday Manjang, one student from the Gambia found the student-teacher interactions to be interesting as well.

At his school, teachers are much more strict on students. “If we do something bad, they are allowed to hit us with a stick,” he said. Here, he saw a many more informal interactions between students and teachers here.

As I brought my guest, Selma Soulama around to my classes, I soon discovered that even though she is a year behind me in school, she already knew how to do a majority of what I was learning in my classes.

In physics class, my teacher gave Soulama the worksheet my class was doing. She finished it very quickly and then helped me to complete my work.

Soulama was surprised to see how accepting our school is to the LGBTQ community.

“[LGBTQ people] won’t let anyone know they are gay in Senegal or The Gambia,” said Soulama.

Mr. Penniman and Mr. Sarr have put so much of their time into this wonderful program. Every member of  the club in incredibly grateful for their dedication to this exchange.

I think it is safe to say that the Senegambian Scholars program changed all of our lives and created life-long friendships. My host families in both Senegal and The Gambia feel like my own family now and we text or call everyday.

Mr. Penniman and Mr. Sarr hope to find new people to take over running the program and chaperoning the trip in the future.

Anyone is welcome to join the club and there are scholarships and financial aid available to those who need them.