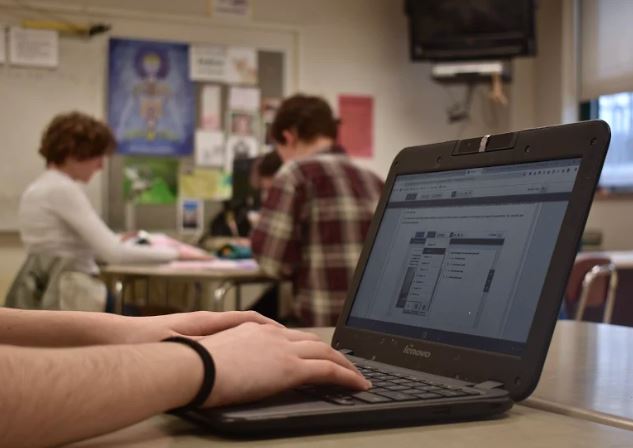 Sophomores testing out the layout in advisory.Photo: Sophie Schreyer

We have turned the corner of MCAS season. All sophomores took the “Next-Generation” MCAS testing, on Chromebooks, starting with the English Language Arts (ELA) portion, on March 26 and 28.

This was the first year the exam was taken on computers, though some of last year’s sophomores tested out the online features in a mock MCAS testing session.

Now a junior, Miya Hong, who took the test both ways said, “I preferred the paper version of the MCAS. I feel like technological advancements are good, but sometimes just having a paper copy is better.”

The Massachusetts Department of Education (DOE) also changed the format of the test, arguing this is the result of setting higher standards for student learning. “Now that we have upgraded our learning expectations over the years through revisions to our learning standards and content standards,” said the DOE website, “it is time to upgrade our assessments for the next generation of students.”

The ELA section of the test is radically different than in years past. English Department Head Sara Barber-Just said, “Gone is the hours-long testing session where students write a five paragraph literary essay on a book of their choice.” According to Ms. Barber-Just, the DOE “replaced it [with] the reading of articles, essays, book excerpts and poetry, followed by multiple choice questions. There are also three long essays: an argumentative, a narrative, and an explanatory response that students answer using content from the test readings.”

Even with the additions to the ELA test, Ms. Barber-Just had no doubt the students were capable of successfully completing the exam. “I wasn’t worried about this test. We don’t teach ‘to a standardized test’ but the majority of our tenth graders have scored advanced or proficient on the test for decades anyway,” said Ms. Barber-Just.

She believes the ninth and tenth grade English curriculum exposes students to a wide variety of literature and writing. “Our students craft persuasive, creative, research-based, analytical, personal, and imaginative essays and speeches in tenth grade. Tenth grade is very writing heavy. I knew they were ready for this test.”

Teachers and students began training and prepping for MCAS a month before the test. On March 6, teachers attended a proctor training program. “[The session] gave a chance for teachers to ask questions and understand regulations around MCAS extended time and bathroom time,” said Assistant Principal Talib Sadiq.

On March 21, sophomores explored computer training for the new system in advisory. All tenth grade English teachers also devoted an hour-long class or more to going over the test format, reviewing the types of writing on the test, reading through state-provided writing samples, and flipping through a 36 page practice test.

Still, some students were wary. “I’m not someone who’s fond of taking tests on the computer, so I wasn’t excited about it,” said sophomore Jana Murphy. “My eighth grade class took one of the first computerized MCAS tests, and the program it was on wasn’t great. When I was told to preview the sample for 10th grade during advisory, it looked very much the same as the one I took in eighth grade.”

Fortunately, Mr. Sadiq said, “[There are] a lot of accomodations that are available to students;” those on IEPs will be given graphic organizers or can take the test on paper, for example. For the ELA test, all students were also allowed “scratch paper” to draft ideas.

Overall, Mr. Sadiq thinks there are positives and negatives to the switch. He believed that student familiarity with Chromebooks would lend itself to ease on a computer based test. But Mr. Sadiq also wished the test was not so “high stakes” and “high-pressure,” though he thinks MCAS is ultimately helpful for tracking student skill. “It is a useful tool to measure some aspects [of student learning and allows] them to demonstrate what they’ve learned,” he said.