Hard work pays off for ARHS track at Nationals 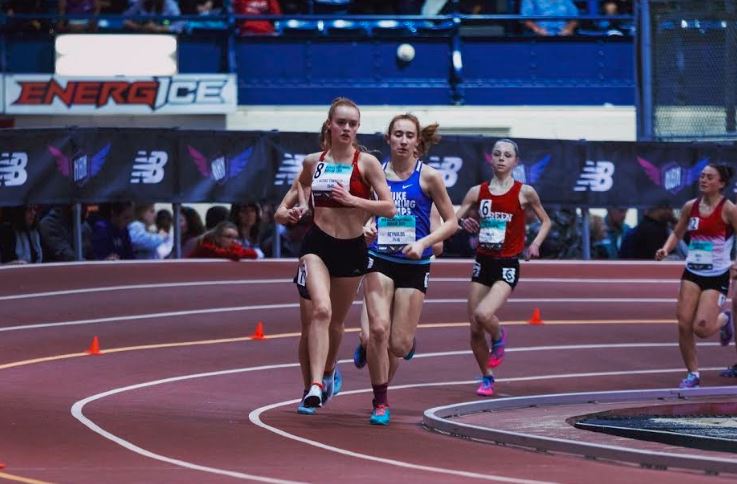 Senior Sophia Jacobs-Townsley took third in the nation running the 5K, and Junior Pontes da Veiga, Isaiah Moyston, Ben Fang, and Kai Bailin were also on top of the world, after coming in fifth in the nation at the 4×200 and 4×400 meter relay at the Indoor Track Nationals held the weekend of March 8-9 in New York City.

Jacobs-Townsley has been running since fifth grade, when she replaced swimming with a passion for track and cross country. “When I got into high school, I just started to focus on running,” she said.

At this point, Jacobs-Townsley runs 55 miles a week and does “lots of lifting” and has spent the last few years training not just with coaches, but with her dad. Her coaches have emphasized a lot about speed and consistency, as has her dad, who also cautions her “not to take too many breaks.”

Adding on to that, Jacobs-Townsley has a huge love for the sport. “I just really like the way it makes me feel,” she said. “Doing something you love that’s really repetitive is just relaxing to me.”

At Nationals this year, all the hard work paid off.  On Friday, March 8, she ran in the championship 5K and the championship 2 mile. Before the race Jacobs-Townsley said she “ate my soup and drank my water and I was ready to go.”

When the 5K race started Jacobs-Townsley had expected to be dragged along in the beginning but it happened to play out the opposite way. “I ended up leading the race for the first 2 miles which is really mentally taxing,” she said. Though two girls ultimately passed her, she was able to hold on to the third place spot–in the nation. Amherst fans were thrilled.

Now, Jacobs-Townsley hopes to accomplish her goals of  “breaking 10:40 in the two-mile and 17 minutes for the 5K.”

She also “just wants to continue having fun with my team until she runs for Boston University next year. Jacobs-Townsley also has many “big focus races“ each year including a state meet for Footlocker, New Balance Nationals indoor and outdoor, and in April, the Arcadia Invitational Meet in California.

Pontes da Veiga started running later than Townsley, at 14 years old at ARMS. “Lots of people encouraged me,” said Pontes da Veiga. His goal now is to be constantly improving. “I want to become the best,” he said.

Of his teammates in the relay, he said,  “We worked hard together. We are all a group of fast people. We finish our workouts every day and put lots of effort into our training.”

While at Nationals, his relay team gave it their all, with Isaiah Moyston running his leg of the race with only one shoe (after Ben Fang loosened Moyston’s shoe during the handoff of the baton), but it didn’t slow him down one bit.  When they crossed the finish line in fifth, the crowd went wild.

Before Nationals, the team was at second place in Western Mass and had their eye on states. They practiced every day of the week at 3 o’clock and depending on the weather it was either inside or outside.

He said the best and more experienced players took on a leadership role. Coach David Thompson, who is the head coach for both indoor and outdoor track, puts lots of work into building a good track team.

Pontes da Veiga loves the sport for the competition. “I like competing and I’m also good at it,” he said.

He plans on accomplishing his goals by working hard “until I get it,” he said.