‘Ask for help, use your voice,’ say therapists of color 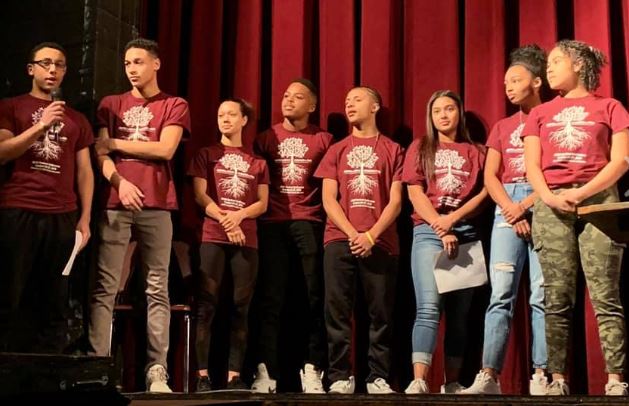 Mental wellness is a topic that’s worthy of most teenagers’ attention. On Wednesday March 13, students in grades 9-12 were lucky enough to attend two assemblies that featured a panel of mental health professionals of color who spoke about their work and answered audience questions.

The event was initiated by ARHS students who attended the Minority Student Achievement Network conference in Boston last year, which focused on narrowing the achievement gap between white students and students of color.

While at the three day conference, they attended workshops and presentations, and began action planning to improve life at ARHS. The students decided to shine a light on mental health issues, with an emphasis on the experiences and needs of individuals and communities of color.

Eventually, they and one of their advisors, Assistant Principal Mary Custard, reached out to local therapists and social workers of color to see if they’d speak at ARHS.

All students attended the hour long assembly, either before or after B period. Panelists were able to bring awareness to the importance of mental health to students, said Luana Semedo, originally from Lisbon, Portugal, who has been in the US since 2006.

“Amherst is a nice community and is very diverse, but we tend to ignore all of the issues within the community,” she said. “The only time we acknowledge these issues is when we’re forced to do it in school.”

She said that the panelits mentioned using mindfulness apps and journaling to reduce stress. And if things get hard, they encouraged students to call mental health hotlines or do research online.

“It is true that we’re always on our phones and it’s a great resource for reaching out and asking questions,” said Semedo.

One of the panelists also said a way to open up conversations with family members or friends about mental health issues was by sending a text message.

Semedo said she learned not to “to be afraid to to ask [for help] and use your voice. Even when  you think nobody’s there for you, someone is willing to help.”

Proctor, a junior MSAN scholar who was involved with making this assembly happen has  grown up in Amherst all of her life.

“Being a part of MSAN has taught me that a lot of schools around the country [face similar problems as] ours,” she said.

Proctor noted that being part of a marginalized group and a lack of representation can contribute to mental health challenges that are specific to communities of color.

She was worried at first that students might “end up being bored or distracted during the assembly,” but felt that the event was powerful.

“It’s important that students hear the voices of [professionals of color] in our community and it’s important to break the stigma around talking about mental health,” she said.