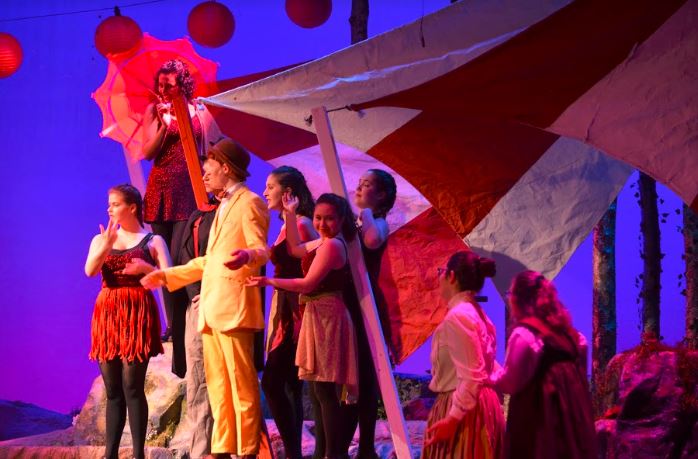 This year’s musical was “Tuck Everlasting,” which was performed by the ARHS theater company. Close to 150 students from all over the school were involved in this year’s production. Four shows were held from March 7-9, with the number of audience members increasing after every showing.

This year’s production was a magical musical that revolved around a family known as the Tucks. They accidentally drink from a magical spring and afterward, never die or age; this has been their family’s secret for over a century.

However, then, the youngest Tuck, Jesse (played by Tristan Lewis-Schurter), comes across a young girl named Winnie (played by Celia Douville-Beaudoin) in the forest; throughout the play, the two grow closer and closer. Jesse falls in love with Winnie and eventually tells her the secret, pressuring her to drink the water.

Performing Arts Department Head John Bechtold said he chose “Tuck Everlasting” for a number of reasons. “I like to keep a eye out on recent shows, ones that haven’t been done yet,” he said.

He also said that he hasn’t done many “fairy tales,” and shoots for variation of shows across the years. He was excited that sixth graders who might have read the book “Tuck Everlasting” could “make a fun connection” to the play.

Mr. Bechtold has many goals for the audience. “I want them to love and appreciate the quality of the overall work, from the performance to backstage, and notice the ability of ARHS students,” he said.

The performances are always a product of many people’s hard work. “Preparation has been a really fun process and it builds community,” said Mr. Bechtold, “Also, it has been exhausting!”

Mr. Bechtold has his own strategies for balancing his different commitments, which include the musical, teaching theater and English classes, and his work as the Performing Arts Department Head, not to mention other responsibilities outside of school.

“Everything has to have a place,” he said, noting he tries to compartmentalize things. “When it’s musical time I give 100 percent, school time 100 percent school, and then I decide to sleep mid-March,” he joked.

Senior Sophie Schweik played Mae Tuck, the mother of Jesse Tuck. This is Sophie’s third year landing a role on the main cast. Schweik also hopes to do some theater in college.

A challenge for Schweik’s last high school musical was “being a senior and not having other leaders to fallback on.”  Something that also posed a challenge was “breaking this hierarchy of cast and chorus and not breaking under pressure.”

Senior Angela Oldham Barca played the role of Hugo, a 15 year old boy, and son of constable Joe, played by Caleb Ireland. Hugo tries to become the deputy to the constable.

For Oldham Barca, this was the second year taking part in the musical and she hopes to be in many more. “I definitely want acting in my future,” she said.

In the end, Mr. Bechtold was happy with another well-done show.

In his Director’s Notes, he made that clear. “Tuck Everlasting is, at its heart, an ode to…connections. To ‘ride the wheel for all that it’s worth,’ as Winnie puts it, to do those things that startle you into realizing that you are alive right now,” he said.