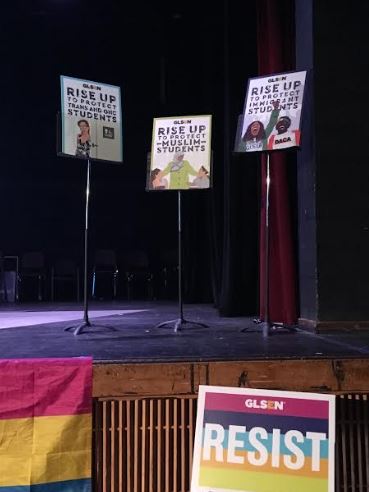 As students entered the halls of ARHS on November 3, 2018 (the weekend before Massachusetts voters went to the polls to decide whether to preserve or dismantle a law protecting transgender people from discrimination in public places), their voices seemed to burst through the solemn air of anxiety and “what ifs” with fortitude.

Shoulders relaxed and mouths turned upwards into warm smiles. Effervescent conversation and chatter grew into resounding laughter and cheering. Despite the moderate number in attendance, filling only about half or less of the auditorium, they were being brought together by  the GLSEN (Gay, Lesbian & Straight Education Network) conference, a day for networking, education, and student-centered leadership to create “safe schools for all students.” It was all a reason to be hopeful.

“I heard more than a few people say this conference, in particular, felt really important to them,” said Emily Pritchard, a special education teacher and the Sexuality and Gender Alliance (SAGA) advisor at ARHS. “It was a space for people to sort of exhale and be together and, you know, have hope, or anxiety, or whatever they’re feeling, but to be in community with people.”

As the day commenced in the auditorium, Ashton Mota, the keynote speaker, and a “Yes on 3” advocate and high school freshman, opened the conference with a statement of purpose: “I want to remind you that we are the future of tomorrow,” said Mota. Mota looked both determined and aware of the struggles that he faces personally, as a black and Latino trans teen, and that his community faces. At such a young age, he has empowered himself to become an influential representative for a campaign to protect his and his community’s rights.

At the conference, Mota and his fellow “Yes on 3” campaigners introduced students to a workshop in which they could make calls to convince others around the state to vote “yes” on question 3 of the ballot.  As participants would find out just three days later, the measure passed with 67.82 percent of voters choosing to preserve those rights. “Mota is well known in the state and outside of the state as being one of the faces of the ‘Yes on 3’ campaign,” said Ms. Pritchard. “He was here, and his mom was here, and it was just really important to have representatives at the conference. It just felt like it was a visible piece of the day.”

Evidence of student leadership, such as that of Mota’s, was prominent throughout the day, in line with the conference’s theme “Let Youth Lead!”

ARHS students Yelena Maher, Lucy Anderson, and Tina Wehrli, who make up the leadership of SAGA, helped plan and organize the event alongside the GLSEN board of Massachusetts. “We met as a whole club with [GLSEN board member] Trenda [Loftin] three times to plan the opening, closing, and any workshops we wanted to lead,” said Anderson. “The club took on a big role, and the majority of the conference was planned by Trenda and the other leaders.” Additionally, these students came up with debrief questions, which participants of the conference discussed in small groups at the end of the day, sitting in circles on the floor of an ARHS gym.

Students also had the unique opportunity to look more at their own community and learn more about each other from fellow students from nearby schools. “Within the LGBTQ community there are so many different identities. Not only do you have diversity outside of identities within the community (like race or religion), but also within identities in the community,” said Wehrli. “Sometimes that makes it hard to find a common ground, but places like GLSEN are great because you can learn about other people and their experiences.” Wehrli also pointed to Banti Jaswal’s workshop about intersex identity as “a really great and education[al] experience.”

Jaswal, a Pioneer Valley Performing Arts junior who ran the intersex workshop, felt that intersexuality as a topic is relatively unknown, even within the LGBTQ+ community. “Intersex,” according to the Intersex society of North America, indicates “a variety of conditions in which a person is born with a reproductive or sexual anatomy that doesn’t fit typical definitions of female or male.”

“Many people don’t know what it means,” said Jaswal. “I’m hoping to give a brief outline about what intersex is.” Many said Jaswal’s personal connection to the topic proved to be helpful in her workshop.

ARHS students were also able to become leaders within their respective workshops. Xiaoping Yu, a junior, wanted to create a space where students could care for their mental health. “I’m creating a space for people to discuss how each one manages stress and mental health,” said Yu. He hoped students could describe how they “reduce their stress to stay calm in different situations.”   “In the LGBTQ+ community, a lot of people don’t know there’s a high suicide rate,” said Yu.

According to GLSEN board members, many students who attend the conference are either not out to people at school, or are not out to their families, telling them that they are attending a diversity day rather than an LGBTQ+ conference. Students are allowed this privacy when enrolling, to increase access to the conference. This policy reflects Massachusetts student confidentiality laws, which state that if a student comes out to a teacher, that teacher may not out the student to anyone else, even their family. Massachusetts law specifically states that “school personnel should speak with the student first before discussing a student’s gender nonconformity or transgender status with the student’s parent or guardian.”

Another increasingly visible part of conferences celebrating LGBTQ+ youth are the potential for the conference to become unsafe. “Since before GLSEN began in 1990, there have been groups who do not value the work we do as an organization, folks who believe that there is some sort of indoctrination that happens at these events,” said Loftin. “It is not uncommon for folks who are not connected to youth or LGBTQ+ serving organizations to try to attend, often without registering.”

The GLSEN board, however, has taken preventative measures to ensure the safety of students. Anyone is allowed to attend GLSEN conferences as long as they register, and after this registration, the board will follow up and make sure the individual will not take any photos, that they will not spread hate speech, and that will not approach students. Additionally, board members emphasize the importance of students having a safe and positive space.

On the day of the conference, one man entered the building and shared his differing opinion on the Yes on 3 campaign with a board member, and was told to leave after he expressed no interest in registering to be a part of the conference. “This is not unique to GLSEN conferences,” said Loftin. “Things like this happen often. We strive to engage both in respectful and firm ways [but prioritize] the safety and well-being of all in attendance.”

On this early November weekend, however, learning and respect that took center stage. Many students said that they had never, or had rarely been in a space where they were able to see people who looked and/or thought like them. Media often shows cookie-cutter LGBTQ+ characters, and the conference highlighted the diversity of the local queer community: styles ranged from classically “masculine” and “feminine” to  androgynous; attitudes ranged from shy and quiet to bold and upfront; students hailed from many different ethnic backgrounds.

As people from all walks of life circled around the gym, they laughed and talked.  People who had once been strangers pulled each other into the middle of the circle and the dancing began, goofy and fun. They swayed with their new friends and partners. The whole room glowed with a warmth and joy of  community.