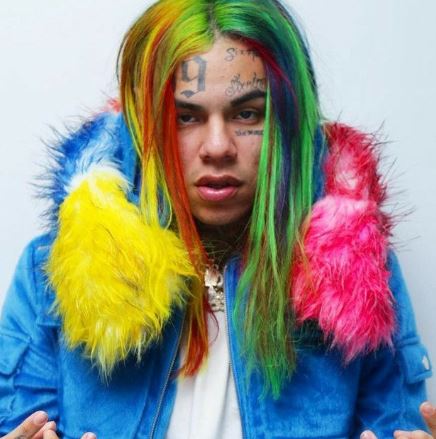 This year on Nov 19, one of the most viral and controversial people in the modern rap industry, Tekashi 6ix9ine, was arrested by the federal government after being affiliated with the Nine Trey Gangsta Bloods, and being brought up on racketeering and firearms charges.

He had also previously been sentenced to four years probation, years after he was arrested for his alleged “use of an underage girl in a sexual performance.”

Through crazy stunts, a lot of beef with other rappers, and his aggressively hyped music, 6ix9ine climbed the ladder to fame insanely fast, and made sure his name was one everybody knew.

Rick Ross, a veteran in the rap game, commented via the song “What’s Free,” concerning 6ix9ine, after he went to prison. Ross chanted, “Screaming gang gang now you wanna rap, racketeering charges caught him on a tap.”

Regardless of the rash attitude 6ix9ine seemed to have towards many other rappers, and his  infamous reputation, when he went to prison, many popular figures in the game such as Meek Mill wished the best for him. “I don’t wish prison on nobody,” said Meek Mill, who had a well-known prison experience himself.

Meek was in and out of prison for years for a crime he says he never committed, and has complained, with the support of many people, about the unfairness from the judge surrounding his case.

6ix9ine’s case, however, is rarely acquainted with the words unjust or unfair, and many people believe prison is where he belongs. And while many other rappers are saying publicly that they hope the best for him, they may not be speaking their minds.

“The energy you put out in the world is what you get back,” said Charlamagne the God, as a piece of advice during an interview with 6ix9ine, according to The Breakfast Club interview on Youtube channel 101.5.

In that same interview just days before his arrest Tekashi said, “There’s only two things I fear in life. I fear god and I fear the FBI. I move so militant nobody [else] can touch me.”

After his arrest, Tekashi’s publicity rose even more especially since his album was leaked. Articles were flooding in, talking mainly negatively about the young rapper, and using his lyrics to portray him as both violent and crazy.

On the other hand, some sought to balance these portrayals with positive deeds from his past. He donated the sales of his song “Fefe” to youth programs in NY, donated to schools and the homeless in Chicago, and called out rappers from that city to do the same. He also visited a kid with terminal brain cancer to fulfill his last wish.

As a result, I was interested in what ARHS students thought of this notorious rapper.

“He had a lot of cases; his manager and whole team were involved in altercations with other gangs,” said Akeme Mallory about 6ix9ine. “But he also has done great things for his community with giving back in NY and also in his home country.”

Unlike Mallory, many people felt no sympathy for 6ix9ine and believed he deserved everything coming to him. “Yes, I have heard of 6ix9ine and that he is a pedophile, and was involved in racketeering and robbery,” said Sofia Maroulis. “If he commited a crime, he should go to jail; it’s not like he’s special.” The people sitting at her table agreed with her comments.

I was also interested in examining influences in rappers’ lives that lead some of the big names out there to be more likely to commit pointless crimes when it seems they have everything they could ever want.

6ix9ine is an example of someone you could call a product of their environment. He grew up around crime and drugs, and when he was 13 he saw his father be fatally shot. “I should have been given PTSD help,” said Tekashi, in another Breakfast Club interview.

He explained how he was given a counselor, but how he could never really be helped by her because she was not doing it to help him, but just to make money, and she didn’t know of the life he came from.

There are countless rappers who fit into the same category as 6ix9ine, where their past life on the streets still haunts their new life of success, but some of the most successful rappers in the game are those that managed to turn their struggles into more positive messages.

Some examples of these rappers are J.Cole, Kendrick Lamar, and Chance the Rapper. J.Cole is constantly spreading positive messages into his music, but it is not that he doesn’t talk about crime and drugs. It’s that he doesn’t worship them, and tells stories through his lyrics that offer wisdom to the youth and next generation.

“His messages are so important to the youth and elders, his music is educational,” said Mallory.

J.Cole’s latest album “KOD” was a message to the new generation of rappers like 6ix9ine. He genuinely seemed to want the best for them, and help lead them in the right direction.

“A lot of rappers respect 6ix9ine because they know that he’s smart and just as intelligent as the other guys, but he’s using his intelligence the wrong way sometimes,” said Souljah Ferreira.

The rap industry has also changed drastically in the mainstream style in the past decade, and there is still talent in both sides to be found. Comparing 6ix9ine to J.Cole is hard and unrealistic because their music and motivations are so different. “It’s not even in the same genre,” said Sofia Maroulis.

Rap and music overall is a form of self expression and there are no rules to how you can express yourself, allowing for people like Tekashi and J.Cole to be successful. People listen to music for a variety of reasons, and different types and styles of music will fulfill different peoples taste in music.

But as far as ARHS students are concerned, their respect largely goes to the rappers who use their influence for good.