Crystal Garrity: learning the ropes of the guidance office and loving it 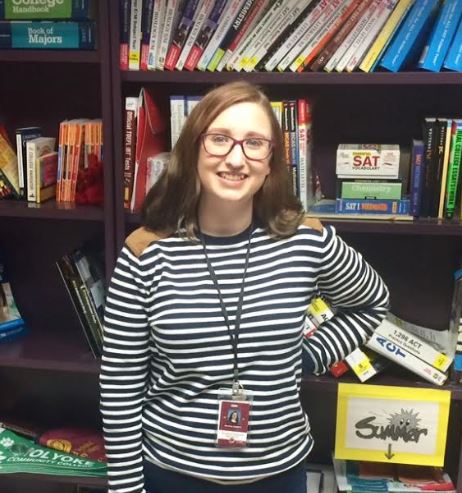 There’s a new face in guidance! After 23 years of hard work, we said goodbye to Connie Capelli, our now retired guidance secretary. Lucky for us, Crystal Garrity was brave enough to take on the challenge of running the busy ARHS guidance office this fall.

Starting during the summer in the main office, Ms. Garrity was grateful to learn the ropes and meet all the staff before the hectic start to school.

“I help all of the counselors schedule their meetings; I help seniors with their college application process; I take phone calls from parents; I organize the job book; and in general, I just try to streamline the process of folks who need to get guidance assistance in one way or another,” Ms. Garrity said, when asked what her job entails.

She explained that her favorite thing so far is the culture at ARHS, which she said is unlike any large public school she has been in or worked in before. “The school is just really caring; everyone really supports each other,” Ms. Garrity said. “I feel like everyone tends to feel safe and heard here.”

For her own high school education, she went to a very tiny school in the Berkshires called Bart Charter School. “My graduating class had five people in it,” Ms. Garrity said. That school has a very tight knit community and Ms. Garrity continues to attend every graduation.

“It’s a small great community and I still have people there who care about me and I care about them,” Ms. Garrity said. “I always feel like when I go home to visit family it doesn’t feel like I’m really home unless I’ve stopped by my high school.”

Ms. Garrity then went on to study at Hampshire College, “which is how I got into the valley and fell in love with Amherst,” she said.

Ms. Garrity has a background in several types of youth work, including working at Youth Action Coalition for five years before the organization shut down. After that, she worked in the teen girls’ residential house at the Cutchins program in Northampton.

In the future, Ms. Garrity wants to continue working with youth by opening a rural youth art center.

“The upstairs would be artist studios,” she said. “The downstairs level will be a drop-in center where kids can come and feel safe to hang out and be themselves.”

When not thinking about work, Ms. Garrity likes to imagine her next vacation.

“Dream vacation? Oh my gosh, any vacation is good,” Ms. Garrity said. She would especially like to visit San Francisco, since she has heard good things from friends who have lived there previously.

“I want to see the city, see the culture, and stay in some cool places,” she said. “I hear it’s very fashionable.”

Until Ms. Garrity gets her student loans paid off, she is content spending her free time hanging out with friends, doing craft projects, and playing board games.

“I like to write, and watch Netflix, of course. Who doesn’t do that in their free time?” Ms. Garrity said.

Her ideal weekend would start with “getting all of the chores done” so she could relax the rest of the weekend.

Once chores are out of the way,  Ms. Garrity enjoys doing something low-key with her partner like having fun in the community, shopping, and visiting family.

Ms. Garrity also enjoys literature. Her favorite book is called What Happened to Lani Garver, by Carol Plum-Ucci.  She described it as a little dated but one of the first books to come out about gender identity being a spectrum. “It was early in its time,” Ms. Garrity said. “[Gender identity] is not simple clean boxes, and that really spoke to me.”

Ms. Garrity read the young adult book for the first time in seventh or eighth grade. “It’s all about being true to yourself. [It’s] the best way to live and the best way to get your through your teenage years essentially,” Ms. Garrity said.