‘So close we’re like a cult’: Survival Living crew braves a weekend in woods 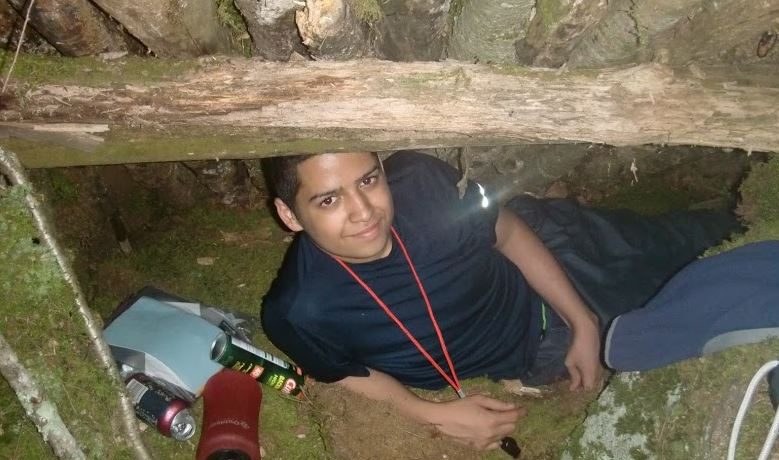 A student in the shelter he built.Photo: Peter Gao

Everyone needs food and water to survive, but very often, just the basic physical needs aren’t enough for people. Humans also crave love, attention, and company, and stray away from loneliness.

However, groups of students from the Survival Living class decide to challenge themselves, year after year, to be placed in the worst circumstances, with little food and water and all alone in the wilderness.

Survival Living is an after school class at ARHS where students learn the basics of how to survive in the wild and experiment with tasks such as making a shelter and starting fires.

The final challenge for these students is to sustain four days alone in the wild with nothing but a small can of supplies. The students pack the 10 ounce cans full of gear such as space blankets, lighters, and food, in an attempt to maximize their ability to survive.

On May 24, a peaceful Thursday afternoon for most of the student body, a group of students from this year’s class embarked on the journey. After a quick group picture and final check- ins, the group was funneled into cars and driven to their solo locations.

Brian Rivera was a part of this group of students. He’s a junior at the high school and sees the trip as an opportunity for “self discovery” and “to challenge himself.”

“I specifically asked the staff of the trip to avoid face to face check ins in order to experience true solitude,” said Rivera.

To many of these students, solo is a changing and formative experience. It gives them a chance to spare the time in the current rapid world to self evaluate and think. One of the students, Victoria Roach, wrote a three page letter to her mother while out on her solo, thanking her mother “for all that she’s done over the years.”

Roach said the trip was hard and emotionally and physically draining. “Now that I am home and have had time to reflect, I realize it was a super positive experience and definitely changed me as a person,” she said.

The formative effect of the solo persists even years after the experience.

Every solo, there are students from past years who miss the environment and come back to help set up the trip for the students.

This year there were as many as six volunteers helping to make the trip happen, ranging from people who took the class two to 10 years ago and the founder of the class, retired science teacher Charlie Camp, who dedicated 50 years of his life to this program.

Carrie Wang, one of the student staff members, said she loved helping out. “I really like the community,” she said. “That’s why I keep going back year after year.”

In the end, Survival Living extends to be more than a class and the solo is more than just a challenge. The class forms a community, and the solo presents the opportunity to see each other grow, and form a bond that lasts for years to come.

“We’re so close it’s like we’re a cult,” joked Rivera.