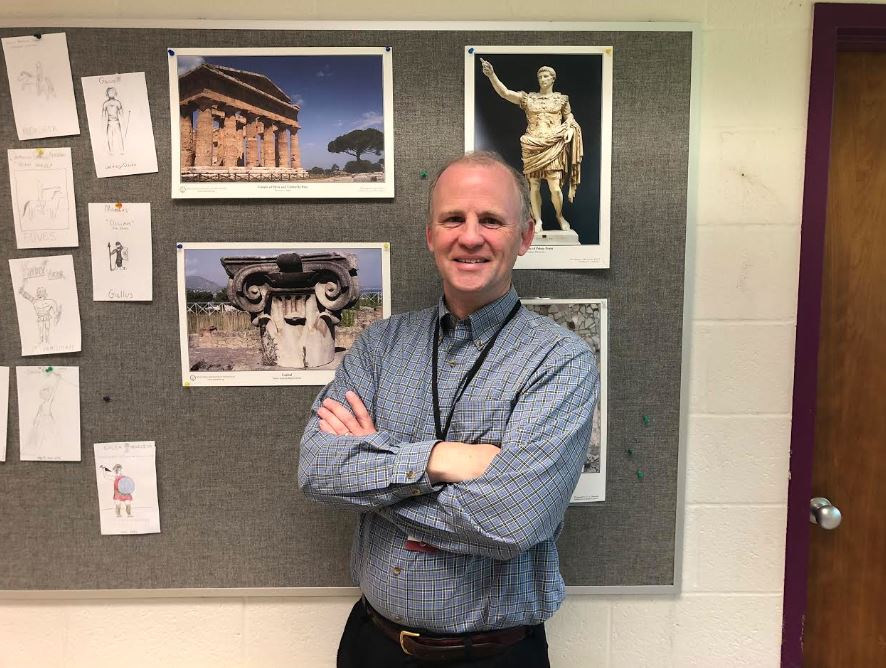 ARHS Latin teacher and Language Department head Sean Oscar Francis Smith, will retire this June after 34 years of teaching at ARHS. Mr. Smith is well-liked by his students and colleagues for his charisma, passion, and knowledge in the subject.

Mr. Smith knew since he was in high school that he wanted to teach Latin.

“I fell in love with Latin when I started taking it in ninth grade. And I said I wanted to be a Latin teacher,” Mr. Smith said. Sure enough, years later, he has been doing exactly what he set out to do.

Over the past 34 years of his teaching, students have loved having him as a teacher.

“What really inspired me about Faber (Latin for Smith) was how he made everything we were learning so relevant, fascinating, and fun. It made even the challenging AP Latin more approachable,” said John Page, an ARHS alumni who had Mr. Smith as a teacher.

Mr. Smith was a very engaging teacher who brought the subject  to life. “As an educator, he was always our personal champion, frequenting sports games, events, and concerts, teaching lessons and supporting students in and out of the classroom,” Page added.

“Mr. Smith was a great teacher,” agreed senior Dylan Walter, who had Smith as a teacher for many years. “He was always down for a laugh and truly loved Latin. His classes were always interesting. The students studying Latin are sad to see him go.”

Caleb Ireland praised Smith for creating a “very enjoyable atmosphere for learning Latin.” Ireland said, “ he strives to engage everyone in the classroom with jokes and questions about what we’re learning.”

Mr. Smith was also excellent at bringing historical aspects of the language to the class to make it more interesting. “He made Latin, what most people see as a dead language, feel so alive and relevant,” Ireland said.

All of this is no surprise. Mr. Smith himself claims his highlight of his career is the “consistent delight [of] just seeing students get excited about learning, whether it’s something about mythology, something about language, something about history when they see connection, and just seeing them grow as both as learners and as people. That’s always been one of the really fun things in my career.”

Mr. Smith has gotten to teach students from seventh grade all the way to twelfth grade. “I get to see kids really change from kids to adults, and it’s an exciting time,” he said. “It’s fun to witness and to be a part of.”

For one course, he was even one of the editors of the course textbook. Smith partnered with a professor at UMass Amherst for the textbook on Catullus.

“That was actually a fun project. When I taught that course, I really enjoyed using that book,” Mr. Smith said. The Catullus book is used in the Latin 4 curriculum. It uses well written Latin poetry written by Catullus, a famous Roman poet.

Despite a long, rich career, Mr. Smith is ready to retire. “I think I have had a good run,” he said. Now, he is excited for what the next chapter in his life will bring. “I’m hoping to spend a lot more time with my grandchildren. I have two grandchildren. And maybe there will be more coming,” Mr. Smith said.

“I have no big plans but just want time to do those things that one doesn’t typically have time to do because of work,” Mr. Smith said, noting his passion for reading, biking, and gardening.