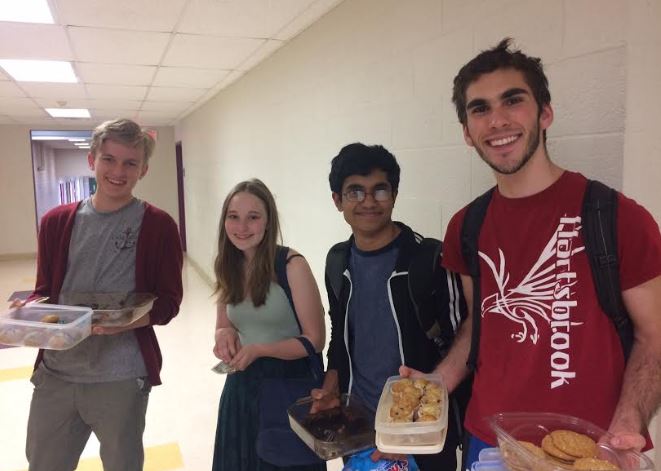 On June 9, on WGBY, the final episode of “As Schools Match Wits” aired, and ARHS took the crown, winning the championship against Northampton High. The team was undefeated all season.

“The finals [leading up to this match-up] were really tense. It was the only time in my life where I was involuntarily shaking,” said Louis Triggs, co-president of the As Schools Match Wits club.

“As Schools Match Wits” is a high school quiz show that centers around six main categories: Arts and Entertainment, Literature, Math and Science, General Knowledge, Social Studies, and World Events. Western Mass students compete annually in playoffs and finals matches to claim the championship. It is co-sponsored by WGBY and Westfield State University, and has been running since 1961.

One thing all the team members had in common is they love trivia. “I like competing because it requires a mix of meaningful knowledge, pop culture, and history, not just menial trivia,” said Triggs. “There’s not much of an outlet [elsewhere] to be rewarded for having that knowledge.”

He elaborated by explaining that trivia matches combine curiosity and a competitive spirit on the road to achieving glory. Senior Tessa Levenstein, a co-president of ASMW said she “never expected to love trivia.”

Levenstein explained that she was never a memorizer of facts, but about two years ago, she watched an episode of the show and found herself knowing most of the answers. “I’m a very competitive person, but I don’t play sports, so this was a great outlet to channel that competitive spirit,” she said.

Senior Jonas Kaplan-Bucciarelli agreed. “When I’m competing, it’s fun to pull knowledge from all aspects of life. It’s not like a test you can study for; you have to just know stuff,” he said. Kabir Narayanan, a sophomore, is the youngest on the team and finds trivia to be “great fun.” After their well-earned championship win, the team members reflected on how nervous they were getting that far.

“When it ended, it didn’t register at first that it was over, or that we won. But then I was flooded with relief and joy, and couldn’t stop laughing,” said Levenstein.

With three of the team members poised to graduate, they all highly encouraged new members to consider joining the team. “I encourage more people to try out,” said Kaplan-Bucciarelli. “The best team is a diverse one, that has special skills from wide areas, not just a bunch of nerds.”

Levenstein said she is incredibly grateful to have been a member of the group.

“I never expected this to be a significant part of my life, but as the team got close and invested so much into the club, this became a really wonderful and hilarious chapter of my life,” she said.

Triggs praised the competition, saying it is “just a great thing to do, with a  wonderful community.”

“It becomes a saga in the life of participants, while creating a story the public can watch unfold,” said Triggs.