Marching for their lives: students walk out of school, rally in D.C. against gun violence 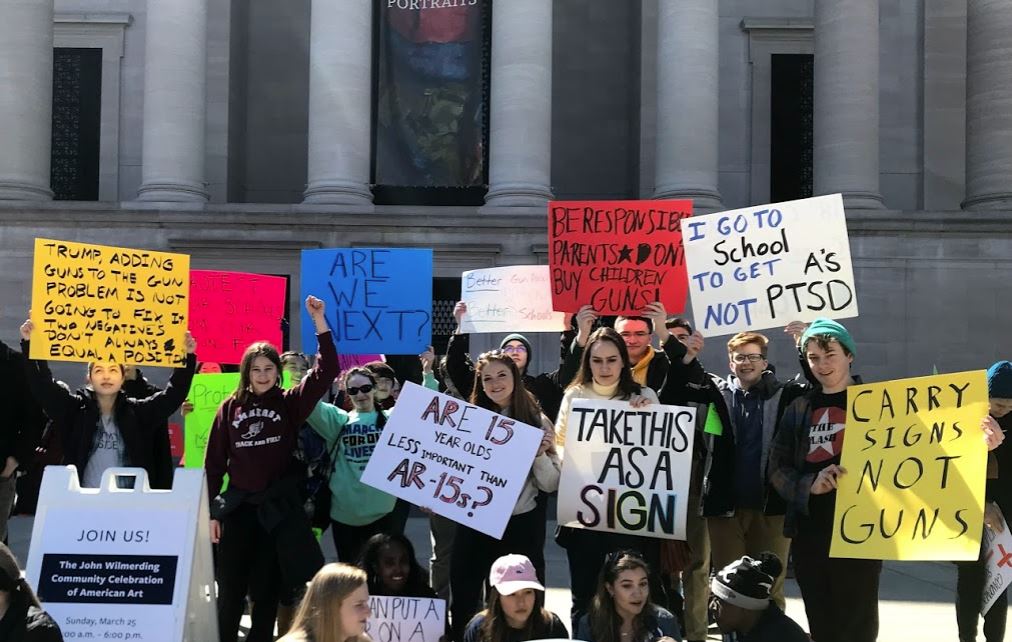 ARHS students, in Washington, D.C. for a music field trip that coincided with the March 24 “March for Our Lives” to end gun violence, took part in the action.Photo: Kara Nye

Hundreds of Amherst Regional High school students flooded out of the building on March 14 at 10 a.m., protesting gun violence in solidarity with thousands of their peers nationwide.

Facilitators wearing orange bandanas began the “Walk Out for Our Lives,” by reading the names of the 17 victims who lost their lives at Marjory Stoneman Douglas High in Parkland, Florida, and concluded it with a moment of silence. The mass of people then joined voices in singing “This Little Light of Mine.”

After the 17 minute walkout, the protest began with student facilitators leading the march down to Spring Street in Amherst. Students and adults held signs and chanted. Community members accompanied the student led rally.

The rally featured a number of speakers including Emily Stenson, the national program director of the College Democrats of America, who called for action, not passive thoughts and prayers. “I’m here to say you’re not the future,” Stetson said. “Your voice is now.”

Abigail Morris, a 17 year old senior, a self-identified activist, and an organizer of the walkout  said, “I went [to the walkout] to show support for Parkland. To show that we aren’t just metaphorically [with you], but we are literally standing with you.”

In February after the Parkland shooting, many students reported feelings of sadness and desensitization, attributed to the high number of recent  shootings. When Malcolm Olendzki, a 17 year old senior, heard about the Parkland shooting Olendzki thought, “Okay, another school shooting.”

Only after seeing the online videos and text message conversations of the victims, did the weight and reality of the situation sink in.

“I started thinking about [a shooting happening] in our community.  It’s a strange feeling to know my environment is threatened,” said Olendzki. “It’s something in the back of my head.”

Morris reported her feelings after the shooting. “I found out on Snapchat news,” she said. “It took a few seconds to hit me, that 17 people died. My reaction was at first the same as every other shooting.”

But that all changed, proving that this shooting was different.

Thousands of youth mobilized around the country to take action after being inspired by the teenagers from Parkland who did the same, even in the midst of their grief. And the hashtag #NeverAgain was born.

NPR reported that an estimated 2,850 schools were part of the student-organized walkouts, representing between five and 10 percent of all high schools across the country.

Students said they felt empowered to be aligning with a nation-wide movement.

“It feels powerful to put out a message together nationally. My reason was to show that I care about the safety of students. I went in not anti-gun, but pro-safety,” said senior Lourdes Jean-Louis.

Other students said they disagreed with the message of the marchers but respected their right to act.

Freshman Phillip Patterson chose to stay in school  during the walk-out and rally.

“I don’t believe guns kill people,” he said. “People with guns do.”

While he supports wide gun ownership, he added, “I don’t condone [the shooter] Cruz’s actions.”

One part of mobilization is reaching out to those in a community to express shared beliefs. In the case of the March 14 walkout, “I posted a link on Facebook calling out for organizers, and 10 people reached out,” said Morris, who identifies as an activist.

This walkout was completely student-led, and was not school-sponsored.

Like previous walkouts at ARHS, including the Black Lives Matter walkout in 2014, students were excused from school to participate if they had a parent signed note.

When asked why he participated in this event and not any previous student actions, Principal Mark Jackson, who walked to town with students, said, “Police asked me to participate. When students leave the building it’s not a school sponsored event. The police were good partners.”

Although he acknowledged wanting to protect students’ safety during the march, Mr. Jackson stopped short of issuing a personal political statement. “I take my own steps to realize the change I want in my community, but I can’t use my official public platform to push my own views,” he said. “I haven’t spoken about it and I won’t.”

Mobilized by this march, many ARHS students who traveled to Washington, D.C. for a music department-sponsored field trip that coincided with the March 24 March For Our Lives in Washington D.C. decided to attend the historic, 800,000-person rally.

“I went because I can no longer stand back and continue to watch innocent students, teachers, and people of color being gunned down due to our country’s lack of regulations,” said sophomore Aarti Lamberg. “There have been way too many school shootings.”

Lamberg said being in D.C. was  moving. “I was completely mesmerized and inspired by the all of the young people and their motivation to end gun violence. We were standing in the same spot for two or three hours but I completely forgot my surroundings,” she said.