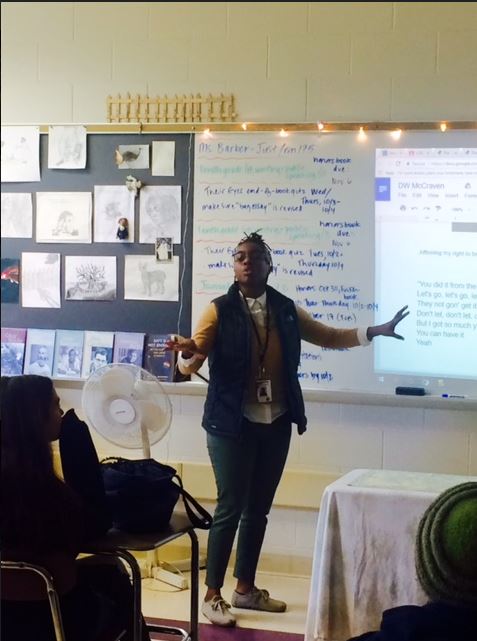 New staff member Dw McCraven never thought she would end up working where she went to high school. After graduating from ARHS, McCraven studied at Manhattanville College, then earned a master’s degree at Columbia College in Chicago.

She was hired as a student support and intervention specialist to maintain peace and harmony for students and staff.

“Mr. Jackson liked the work I was doing on culture and climate in Chicago,” she said, and he viewed her as someone whose talents would help “build relationships with students and staff.”

Growing up, she played basketball, and her favorite subject was science, but outside of school she liked to do hip-hop theater. She is now a well-known performer who has toured with her shows.

According to her bio on her web site, dwmcraven.com, “McCraven is an interdisciplinary artist, with experience in forms such as theater, drag, installation, movement, film, and music.”

She is also a co-owner of a body art business. “I like to be able to get to know everybody and have a real conversation,” she said of people who come into the shop.

She is married to her wife, Kinga, who also went to Amherst High School, and she enjoys hanging out with family in Western Massachusetts or relaxing on her own.

McCraven said she is inspired by someone “overcoming something that is difficult for them.” An example? Her nephew kept trying to put two Lego pieces together and they wouldn’t fit. She said, “He kept bashing them together. Then he started screaming and getting frustrated. But he finally got them together. Seeing that was just amazing.”

Something else she thinks is inspiring is “someone who never speaks saying ‘good morning.’” That, she said, would be “truly inspiring.”