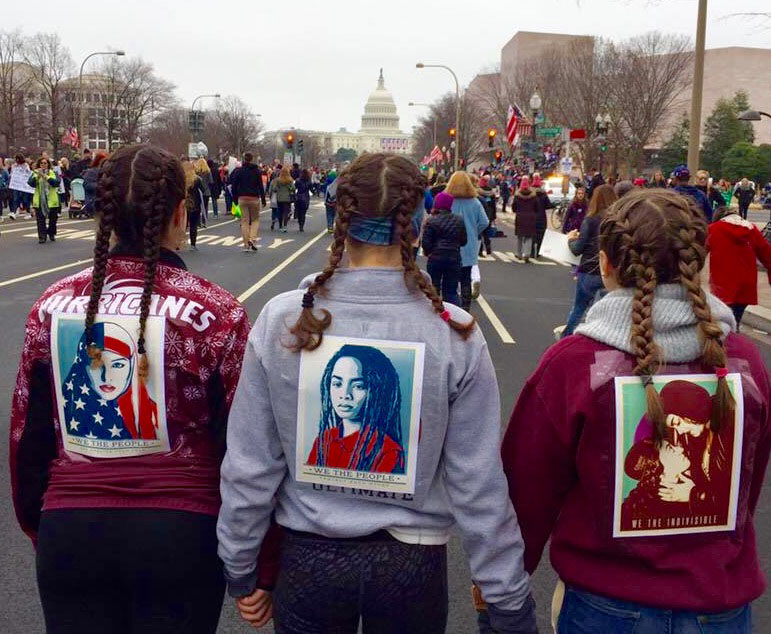 On January 21, 2017, the day after President Trump’s inauguration, ARHS students joined millions of people worldwide in sending a message to the new administration and to Congress that their voices would be heard.

They participated in the Women’s March on Washington, D.C., and in other affiliated women’s rights protests that spread across the globe.

From that moment, she was immersed in the crowd, and the subways into the city were overflowing.

“You could barely breathe,” said Schneider.

Despite the close quarters, there was a friendly and supportive atmosphere.  “It was incredibly positive,” she said.

“Everyone there had a different story and different reasons for marching, but in the end we set our differences aside and marched,” said junior Vincent Rotello, who attended the Northampton march.  “I personally fear discrimination based on my sexuality, but beyond that I saw people of many faiths, creeds, and colors who were afraid for their wellbeing.”

“It felt like something that was historic and important,” said junior Eliza Carson, who marched in D.C.

From her spot in the crowd one block from the Mall, Carson recalled the excited and restless mood before the march.

While some people were ready to get marching right off the bat, Carson loved just listening to the line-up of amazing speakers that preceded movement.

Like Carson, junior Ayla Connor-Kirshbaum appreciated the voices on the stage in D.C.

“The speakers were all really inspiring,” said Connor-Kirshbaum.

Connor-Kirshbaum believes the marches served an important purpose, sending a message to the country’s leadership.

“It’s important for the Trump administration to see how many people are angry and willing to fight,”  she said.

Senior Gina Alkiewicz, who marched in Northampton, took away an important personal message as well.

“I’m still really shocked, but seeing the world come together, being at the march together that Saturday morning gives me hope and strength to face it and help others,” said Alkiewicz.

The organizers and speakers at the marches stressed this message of hope and strength, and used it to inspire continued political involvement.

“This has been the most engaged [people have been], more people than I’ve ever really seen [participating politically],” said Carson.

Everywhere she looked, she saw calls for marchers to take change into their own hands and participate in their democracy.

Other members of the ARHS community agreed with this sentiment.

“Get active, help your neighbors, do community service, and know when your mini elections are.  People turn out for presidential ones but we need you too for the smaller ones, that makes as much change as the big one,” said Alkiewicz.

United voices were also stressed as a step towards change.

“I hope that women’s movements, Black Lives Matter, [and] LGBTQ movements all join together,” said junior Abigail Morris, who went to D.C.

At the end of the day, the marchers returned with a feeling of empowerment.

“The level you can directly impact things is huge,” said Morris.

Marchers said they are more dedicated than ever to continuing the fight that brought them out on that Saturday morning.

“You need to take action to get what you want,” said Carson.