A ‘model’ conference, filled with debate 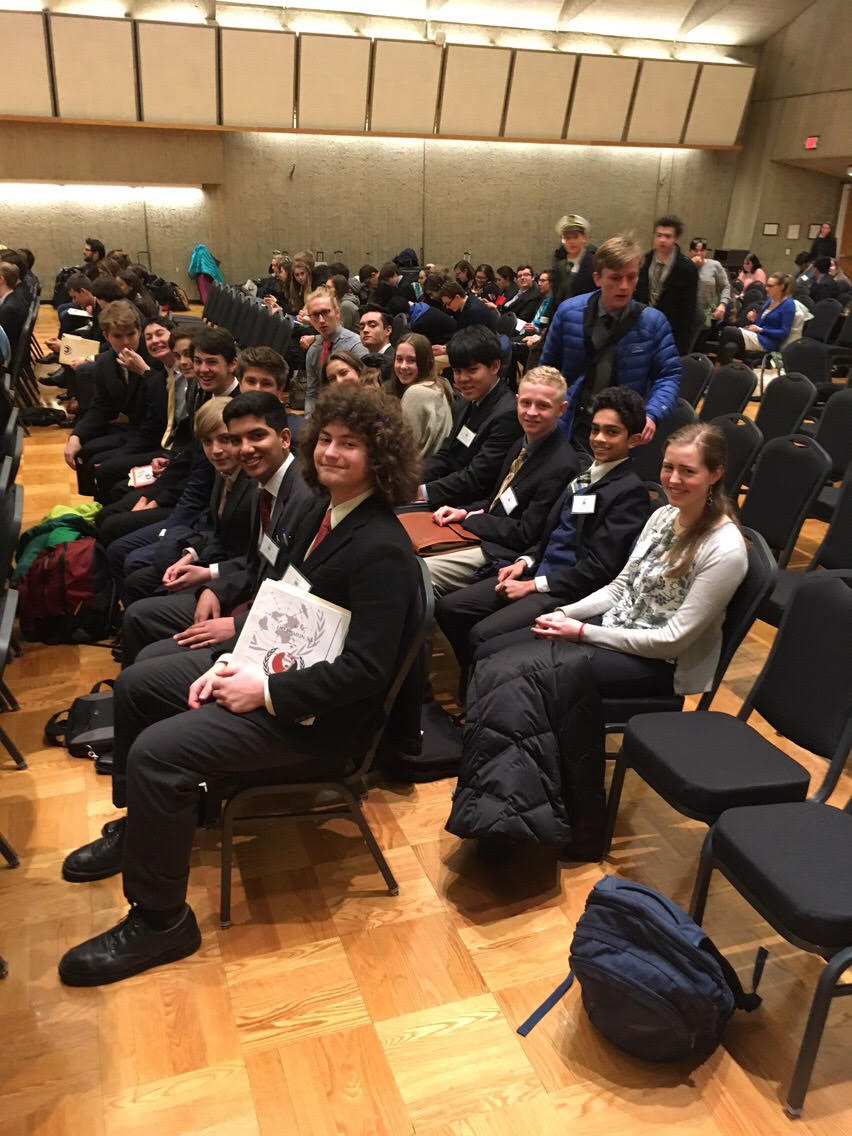 Students in the Model UN club sit at a conference. Photo: Thomas Fricke

For many new members in the Model United Nations (MUN), the UMass MUN conference was their first experience with a formal conference.

Like many freshmen attending UMass MUN, this was Quentin Moliterno’s first time being a part of the kind of event the club revolves around.

Moliterno said he was not nervous, but instead, was “excited to see what happens.”

Oscar Triggs, a sophomore, was also eager to attend and noted it was “an interesting way to learn about Model UN.”

Both Triggs and Moliterno joined the Model UN club for different reasons.

“I like debating,” said Moliterno. “It’s a cool way to solve world problems.”

Triggs, however, said that he joined MUN because “Leif Maynard told me to do it.  He said it would be a good experience and thought it would be fun.”

Moliterno had the role of being the delegate from China, in the committee for Special Political and Decolonization (SPECPOL).

Moliterno said that having this role was “interesting, because China has many different views on things than America does.”

Triggs represented Ireland in the European Union, which was tasked with discussing and debating the Syrian refugee crisis in Europe. “[It’s] something I didn’t know very much about, and I learned a lot in my research,” he said.

However, underclassmen weren’t the only new delegates attending UMass MUN.

Doug Eveleigh, a junior at ARHS, represented Russia in the Disarmament and International Security Committee, or DISEC.

“I thought that it was a fun experience, [and my] first time doing something like this,” said Eveleigh, adding that he “learned it over the course of a weekend.”

“I found people like me and worked with them,” said Eveleigh. “I will definitely be doing it again in the fall.”

Eveleigh was especially surprised with the fast pace of the conference.

“It moved faster than I could have foreseen,” said Eveleigh. “By the end it had not seemed like we had just done five two to three hour sections.”

Eveleigh also said that he was “surprised with how seriously some people took it,” but noted that “overall it was quite nice.”

Moliterno and Triggs also had positive things to say about the conference.

“I liked it a lot,” said Triggs. “It was easier to pick up than I thought. Now that I know what to do, I’ll be much more confident in future conferences.”

Moliterno also said that “to all who are interested, it’s a great way to start Model UN.”

Of the many students from ARHS, only five delegates earned awards; senior Patrick O’Connell and junior Tristan Whalen were named the Best Delegate in their committees.