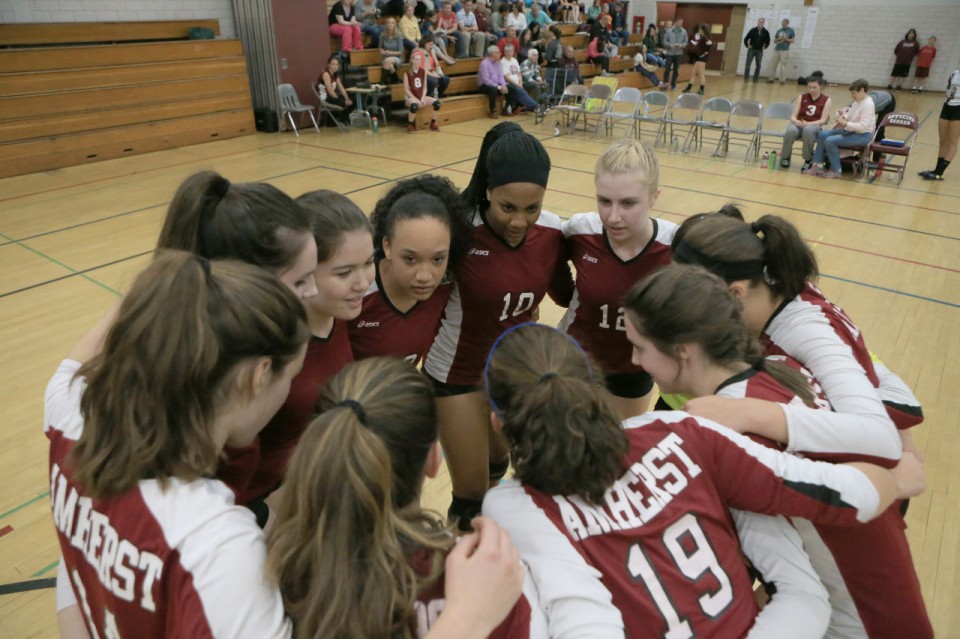 The girls’ volleyball team, all but one of whom have stopped standing for the national anthem at games. Photo: masslive.com

Members of the undefeated girls’ varsity volleyball team wove a passion for justice into their sport before taking down Minnechaug High School 3-1 at an away game on Friday, October 7.

Before the game, players on the Amherst team “took a knee” in protest while the national anthem echoed through the gym.  “We love our country, we just need to point out an issue,” said senior Nina Hayes, a captain of the team.

“Justice for all,” said Hayes, was the message of the peaceful demonstration.  According to her, each player who participated approached the protest from a personal place, choosing her own specific reason to kneel during the anthem.

“I’m doing it to bring attention to Latinos in the discussion of people of color,” said junior Claire Basler-Chang.

Inspiration for the protest came after a passionate discussion about the Black Lives Matter movement at a team bonding night.  “We have a diverse team with a lot of people who are really active in the Black Lives Matter community,” said Basler-Chang.  “We were getting frustrated and angry, and we decided we should take a stand.”

“It just felt right to do it,” Hayes agreed.  “We came together as individuals to do this [and] I feel like we opened the conversation without using violence.”

Coach Kacey Schmitt first heard of her team’s plans on the bus ride to the Minnechaug game.  At first, she was worried that the protest would become a distraction and cause discord on the team.  “But that was not the case,” she said.  “They were mature, respectful of each other’s opinions, and determined to stay unified as a team.”

Schmitt said she supports the girls unconditionally, comparing their protest to civil rights marches and Vietnam era sit-ins.  “They are trying to show that they are thinking outside of themselves,” she said.  “They really are a wonderful group of girls.”

The Hurricanes are not the first team to stand up to injustice by kneeling down.  This fall, athletes across the country have joined the movement that started with the San Francisco 49ers quarterback Colin Kaepernick, who made a splash in early September.

Here in the Valley, more than a dozen Amherst College football players knelt at a game on September 24 while others raised fists in protest.

But as the volleyball team soon learned for themselves, not all have received these protests welcomingly.  “It can seem aggressive,” Basler-Chang reflected.  “When I first saw Kaepernick sitting down, it seemed disrespectful, especially when you’re uneducated about his stance.”

Many onlookers, especially parents of the Minnechaug team, expressed similar discomfort, feeling that the athletes were being disrespectful to the flag.

However, members of the team remained unfazed by the hostile initial reaction.  “We expected there to be backlash,” said Hayes.

Basler-Chang said she was not surprised either.  “To Amherst, it seems really positive, but it’s not like that in other schools.”

“Block out the noise,” was Schmitt’s advice.  “It’s not about disrespecting veterans or snubbing the flag. You can love your country and not love everything it does. It is their constitutional right to show peaceful protest; this is what our country is based on.”

The team has followed Schmitt’s advice, staying focused and unified through the tumult.  “No distractions can get to them,” Schmitt said. “They’re strong. They’re determined not to be deterred.”