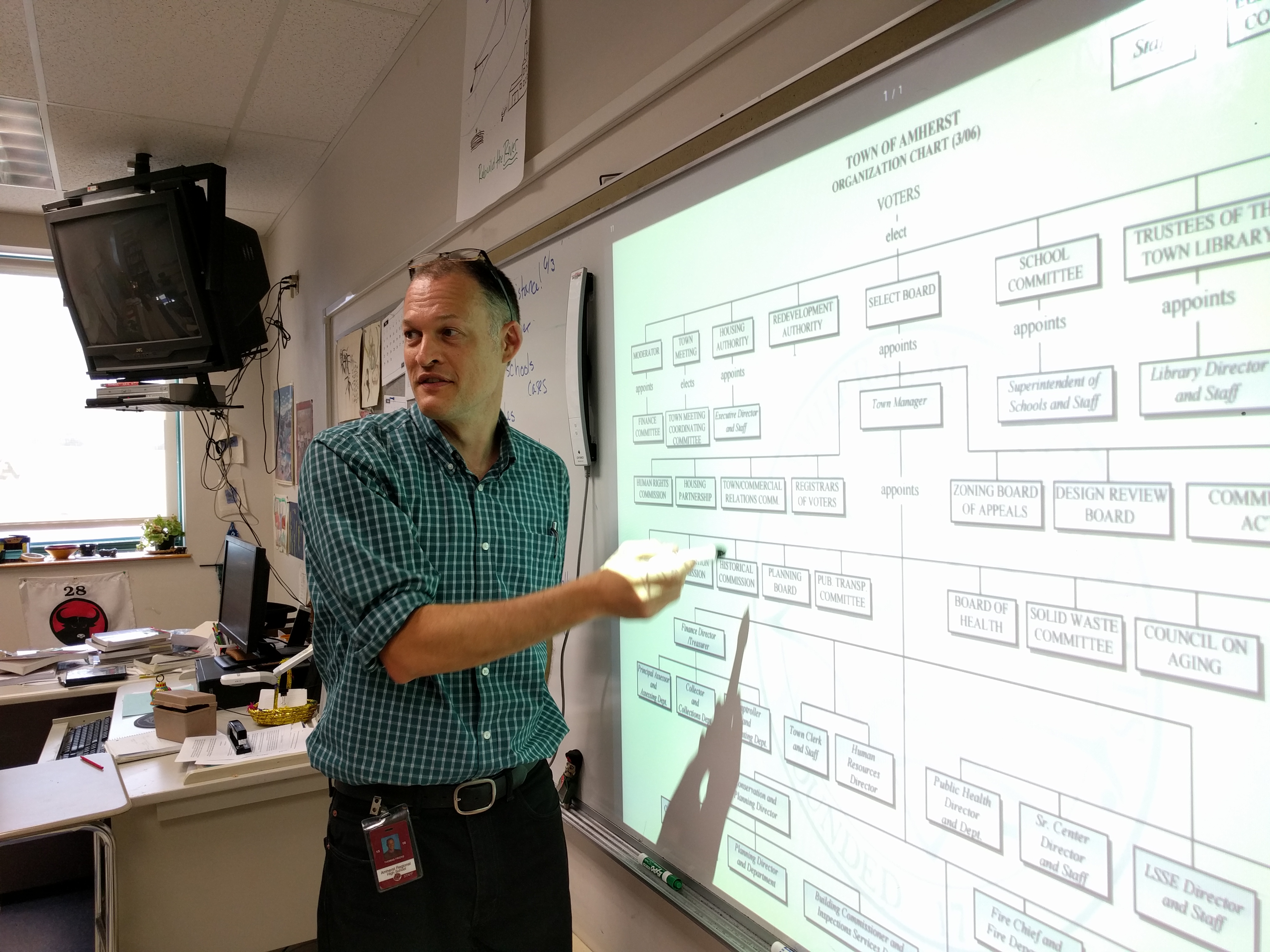 “I’m a government and civics teacher; I’m going to get so many lesson plans out of this,” said ARHS Social Studies teacher Thomas Fricke about being elected to the Amherst Charter Commission in March. The Charter Commission, which consists of nine elected members, will spend 18 months gathering public opinion and developing a recommendation for reforming the town’s governing body of laws, the Town Charter.

Though Mr. Fricke had not initially considered running for the Charter Commission seat, he received the suggestion from friends and neighbors. “The more I thought about it, the more I liked the idea and its fit with my job and academic interests,” he said.

For Mr. Fricke, who has been teaching Constitutional Law for 16 years, teaching and political participation go hand in hand. “This is the best thing ever for the theoretical and practical consideration of democratic principles,” said Mr. Fricke, who hopes to apply his classroom teachings to his Charter Commission engagement, and vice versa.

To get on the ballot, Mr. Fricke collected 50 signatures, which didn’t take long. “I have a natural advantage in that my job puts me in contact with so many families in the community,” said Mr. Fricke. “I didn’t really have to campaign because I get a lot of name recognition.”

Mr. Fricke also participated in a Candidates Night, in which a panel of the 19 Charter Commission candidates answered questions posed by voters and members of the local community. “I think I spoke three times,” said Mr. Fricke. He also issued written statements, which were published by the League of Women Voters and local newspapers.

“It’s been a tremendous education for me,” said Mr. Fricke. “I’m meeting a lot of people in the community, and making even more connections to politically active and engaged citizens. No matter what happens, I’m pleased to have done it.”

The government of Amherst is laid out in the Town Charter, which is a publicly available, 13-page document that acts like a local constitution. By the Charter, Amherst residents elect members to each body of local government.

The town legislature is the Representative Town Meeting, whose 254 members hail from the ten precincts of Amherst. The five-member Select Board serves as the Chief Executive Office, and appoints the Town Manager. Other elected bodies include the School Committee, the Board of Library Trustees, and the Moderator of the Town Meeting.

When residents want to make changes to the Town Charter, they can gather a citizens petition prior to a Town Election. This petition seeks to pose a yes or no question on the ballot, reading, “Shall a commission be elected to frame a charter for Amherst?” Simultaneously, the ballot includes candidates up for election to the Charter Commission, should the question itself pass with a majority vote.

The Charter Commission has 18 months to hold public meetings and gather sentiment from the town, after which they form a proposal to put up for vote on a ballot. Historically, Amherst has had two Charter Commissions, though the proposals of neither passed when the town voted on them. This third Charter Commission seeks to change that.

“I think it’s a good idea,” said Mr. Fricke about the Charter Commission. “I don’t think that the Amherst system of government is broken, but I’m really interested to see if it is possible to make it better.”

Mr. Fricke highlighted fundamental issues with Town Meeting. “People who get into Town Meeting may or may not have won competitive elections,” he said. “A large number of people in Town Meeting simply put their name forward and walked in the door.”

Mr. Fricke treasures the inclusivity of the local electoral system, stating that campaign costs and time commitment are very low. “To that degree, it is a phenomenally open and participatory system,” said Mr. Fricke.

“What’s exclusive about it is that you need a lot of time to commit to attend a Town Meeting that runs for an undetermined number of weeks. It has this twin dynamic of being big, welcoming, and inclusive, but also exclusive in terms of the resources that would require you to participate.”

Mr. Fricke also questions whether the Town Meeting is truly representative of the entire Amherst population. “Every Town Meeting member is representing themselves,” he said. “Those self-selected members are naturally going to put their own issues front and center,” he said. He feels that this leads to a pursuit of the interests of what former U.S. President James Madison called “factions.”

Mr. Fricke emphasized that he does not desire to dissolve Town Meeting. He wishes to maintain its inclusivity, yet insert accountability and increased electoral competition. “What we’re focusing on is the balance between accountability and efficiency, and inclusivity and breadth of participation,” said Mr. Fricke.

Mr. Fricke also exerts caution, noting that he feels government needs to be “selective without being exclusive.” He emphasized that the successes of Town Meeting are not few, and therefore should not be constrained.

“I think the most discouraging thing is when people give up on participatory democracy,” said Mr. Fricke. “It is tremendously in Amherst’s advantage that we are coming into the question of Charter reform with a vibrant and engaged citizenry, and that’s exactly the kind of debate you want to have in a healthy democracy.”

Mr. Fricke is optimistic about the outlook for the Charter Commission, and moreover Amherst as a whole. “There is definitely an appetite for reform,” said Mr. Fricke. “Asking this question was one of the smartest things we could do.”