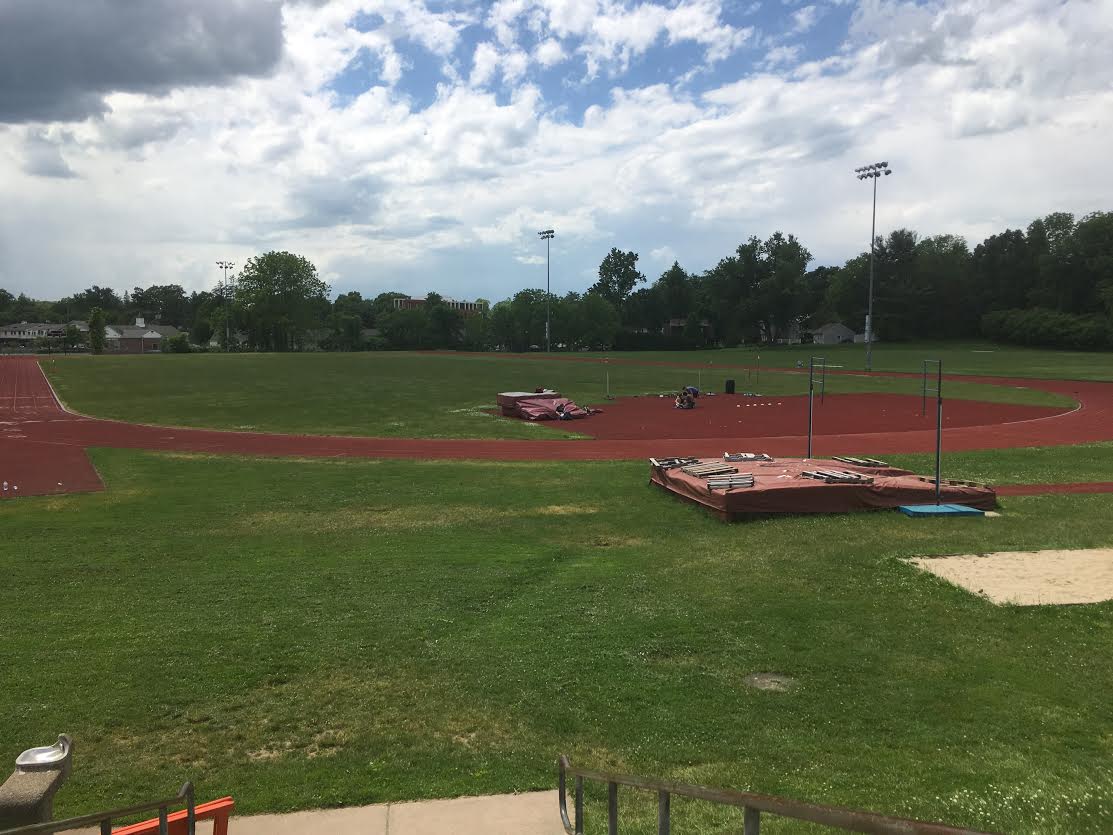 It was a Monday night this spring at Amherst Regional High School, and Amherst Track and Field was facing off against East Longmeadow.

However on this night, one of the main events was not played. The high jump competition was cancelled, due to faulty equipment. The mat used by the athletes in the high jump was deemed unusable, and the contest was not scored.

Although the problem was soon fixed with the help of ARHS’s business director Sean Mangano, this cancellation was emblematic of the difficulties and complications with the high school’s sports facilities and equipment.

Students at ARHS often compare their sports fields and facilities with those of other towns, and many say that Amherst comes up on the losing side.

While some students level blame at the athletic director, an inadequate sports budget is actually the biggest problem, along with a limited DPW budget for grounds maintenance.

That doesn’t stop the complaints from coming, though.

Athletes have expressed a wide range of complaints concerning the caretaking of the fields.

“They cut the grass from time to time, but it’s not enough,” said junior baseball player Seth Bella-Hunter. Other players from the team were also less than pleased with their playing field.

“We are a varsity team, and our field makes us look bad. I think they try to put a good amount of effort in, but [the field] can be embarrassing,” said senior Jason Papakonstantinou.

On the other hand, athletes said they appreciated some aspects of their field.

“The scoreboard and the lights are the best part. [The game] feels more professional with those,” said captain Jake Balderston.

Baseball is not the only sport with less than ideal facilities.

The softball team also has expressed concerns about their field. “I feel like they care about baseball way more. Our dirt has clumps everywhere,” said junior Rafi Fabrizi.

The lacrosse team plays their games on the football practice field, which has also taken a beating over the years. “The grass is dirt. It’s been run on so much that it can’t even grow anymore,” said junior Noah Spiegel.

Grass is also a concern on the soccer field, and many footballers are upset with the surface condition. “We raise a ton of money in fundraisers; our field has got to be better,” junior Samson Heyer said.

Track and field is one of the high school’s most successful sports, with multiple Western Mass and national titles in the last handful of years.

However, students are frustrated with the condition of the track itself. “No one takes care of it, or enforces that people stay off it,” said senior Ariel Christie. “Some parts of [the track] are so damaged, you can’t even run on them.”

Mr. Mangano was willing to share the athletics budget for 2016, and the results were shocking. The overall budget for athletics was around $534,000. Half a million dollars may look enticing on paper, but once that money gets sent out to pay the expenditures, almost all of it disappears.

Around $250,000 of that budget is spent on coaching, officials, drivers and trainers, so before a single practice is even held, half of that budget has vanished.

Contracted services and transportation amount to close to $100,000. All of these expenses are necessary, but end up accounting for a huge chunk of the sports budget.

“When all is said and done, I have maybe $5,000 left,” said ARHS Athletic Director Rich Ferro. That’s why many teams rely on coaches to buy new equipment for their respective teams, because the budget can’t cover every team’s equipment. “When I was in high school, they used to hand the hockey coach $2500. Everything we had was brand new,” said Mr. Ferro.

Amherst desperately needs a new track, which has taken a harsh beating over the years and is becoming harder and harder to use. Students would love to see a brand new track, but as Mr. Ferro estimated, that would cost about $500,000, which unfortunately is money that Amherst simply doesn’t have.

Many athletes at ARHS look for someone to blame for the inferiority of their fields, and often, they choose Mr. Ferro.

However, the caretaking or lackthereof of the fields is not entirely in his control.

“The DPW (Department of Public Works) employs four people to mow everything in Amherst. Every park, every common, every field. I have no control over how much work they get done,” said Mr. Ferro.

The lack of state funding is another key reason why ARHS has a much smaller budget than other schools.Take a town like Chicopee, for example.

“The average income in Chicopee is much less than [the average] in Amherst. The state gives Chicopee schools a lot of money to make up for that. In Amherst, we do not get any state funding at all [for athletics],” Mr. Ferro said.

Chicopee High School recently built a brand new gymnasium, and the money provided to them, largely paid for with state money.

Mr. Ferro also commented on the condition of the grass that many students complained about. “Those fields need rest. The problem is, there are people playing on them in every season,” said Mr. Ferro.

The lacrosse field and soccer fields were recently aerated for the first time in a few years, and the hope is that the grass may be able to grow again.

Although the fight for better fields seems like a battle destined for defeat, Mr. Ferro has his main goal still in sight. “I would love a turf field, right in between the track,” said Mr. Ferro.

He also envisions one side with stadium seating. The only problem with that goal, he admitted, is that it would cost about a million dollars, just for the turf.

However, Mr. Ferro believes there is a way to make it happen. “If we have a graphic of the field, and we can show sponsors where their ads would be, I think we can make it happen,” he said.

Despite the negativity associated with the athletic facilities and equipment, Mr. Mangano and Mr. Ferro are staying positive.

“It’s not a quick process,” said Mr. Ferro. “It’s hard for Amherst to fund everything, but it’s getting better,” said Mr. Mangano.

Amherst has recently acquired a new high jump mat and pole vault set-up that will soon be put to use.

Lastly, a committee composed of Mr. Ferro, financial consultants, and directors of finance from the town and from ARHS, is set to meet soon to plan future projects.