Wild guys with a lot of love 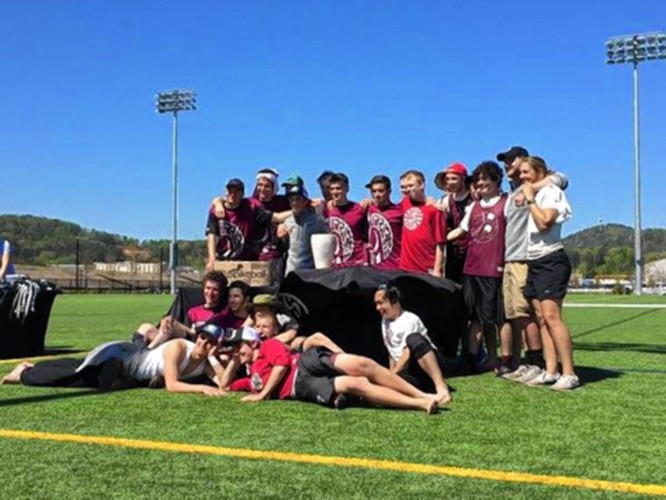 Boys’ Ultimate poses after its win at the Paideia Cup.Photo: Gazettenet.com

Team captain Luke Webb, ‘16, describes the boys’ varsity Ultimate Frisbee team as a group of “wild guys with a lot of love.” He said, “Spiritual enlightenment is a big goal we are going for.”

With mostly returning seniors, including captains Oliver Fay, Jacob Kaplan, and Webb, the team carries a high level of skill this season.

Beyond practice, the team bonds through team dinners and get-togethers. They also have a Facebook group, where Webb said that strange things happen. “We’re a very glued together, tight team,” said Webb. Some of the players recently went shopping for sweatpants, which they cut to three quarters’ length.

Rueschemeyer-Bailey said that he would like for the team to beat the UMass Ultimate Frisbee team, but also said that it probably will not happen. The UMass team is coached by former ARHS coach and legend Tiina Booth. Some other rivals include the Carolina Friends School in North Carolina, Pennsbury High School in Pennsylvania, and Northampton High School.

“They think they have a chance of beating us,” said Rueschemeyer-Bailey about Northampton, “but that’s absolutely nutty.”

This year, the team traveled to Atlanta, Georgia to play at Paideia Cup XI, a tournament where they were matched up against the best high school teams in the country. The Hurricanes defeated the Carolina Friends to win their division at the cup.

Webb describes the team’s dynamic as a combination of “relentless attacking” and kindness. “Our goal is go to as hard as we can, and still play happily and respectfully,” said Webb. “We want to demolish teams and make them like us.”

As a tight-knit, spiritual group of people, the team continually strives to be the best. “We’re hungry this year,” said Rueschemeyer-Bailey.