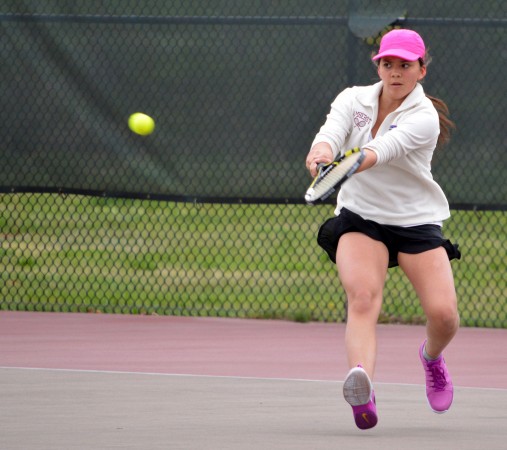 Margaret O'Connell in a match against Minnechaug on May 5. Amherst defeated Minnechaug 3-2.Photo: masslive.com

Amherst tennis has its eyes on the Western Mass title this year, but not before bringing a team full of newcomers together and focusing on rebuilding.

Allison McCann recalls a team of 20 players when she started. This year, the team  has fewer than 10. “We’re getting the hang of it,” said McCann.

The boys’ team is also focused on building a new team. “I’m excited for bonding with new players, both younger ones and older,” said Andy Zyskowski.

Friday, April 8 started the season off for both the boys and girls. In a triumphant 3-2 win over Ludlow, the Amherst girls had a lot to celebrate. McCann won both her matches 6-0 as the defending Western Mass champ, while teammate Margaret O’Connell won each of hers.

Their third singles player, Nya Saunders, dominated her matches, too. Although their doubles squads are full of fresh faces, the team hopes to improve technique.

After a close 3-2 loss in the first match of the season with power-team Minnechaug, the boys knew they had a lot to work on. “I want to improve my own game this year, but also help everyone else get even better,” said junior Patrick O’Connell.

The boys are hoping to increase their fan base. “We usually don’t have fans, but other teams bring so many to watch. We need that,” said Zyskowski.