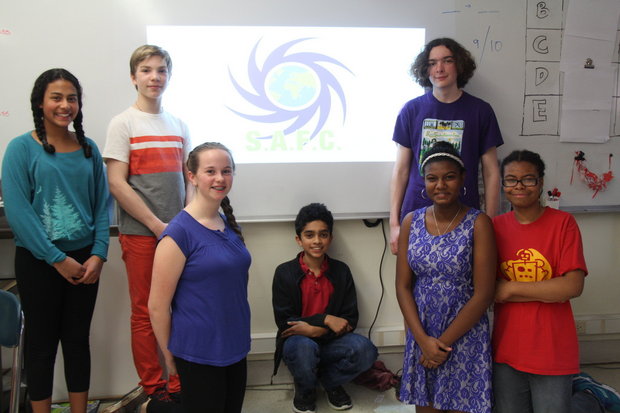 In October of 2015, a group of students from Amherst Regional Middle School first got the idea to rally to change Columbus Day to “Indigenous Peoples Day.”

The 22 students included Kelly Brown, Aarti Lamberg, and Hillary Atkinson; all were inspired after learning historical facts about Christopher Columbus in their social studies class, with teacher Matthew Venditti.

They also worked with a social studies student teacher from UMass, Hayden Frechette-McCall. “We’d like to stress that Mr. Venditti and Mr. F-M were simply there as facilitators [in the process],” said Brown.

In class, they debated about whether or not they should celebrate the holiday in Columbus’s honor.

“We began this project by looking at multiple perspectives on Columbus from various historians, including Samuel Elliot Morrison and Howard Zinn, who have very different viewpoints on Columbus, as well as excerpts from Columbus’s journals,” said Lamberg.

“We developed our arguments, presented our positions, and debated our views in class. Finally we voted. Our results showed a large majority wanted to do away with Columbus Day.”

The students used to meet every day during their lunches and advisories, but now they only meet on Wednesdays. During their meetings they discuss upcoming presentations and fundraisers, and work on PowerPoints related to the topic.

“When we first started, I was not sure how far the students could take the project. However, it quickly became clear that the students were passionate about their campaign and that they would not stop until their goals were met,” said Mr. Venditti.

The students decided to name their group the “Student Advocates For Change,” or “SAFC” for short.

“We gave ourselves our name SAFC later on in the process. We decided our name should encompass our overall goals and leave room for other equally important challenges in the future,” said Atkinson.

“I think if we did away with celebrating a mass murderer and instead studied and celebrated the varied and unique culture of indigenous people, it could create better opportunities for the dwindling population of Native Americans in North America,” said Lamberg.

“Changing this holiday would shed light on the fact that so many people had been taught history from such a subjective viewpoint,” added Atkinson.

Inspired by the students, the Amherst Regional School Committee altered the school calendar to reflect a day off in October for Indigenous Peoples Day.

The students still have their sights on making the change town-wide. They have the support of the Amherst Human Rights Commission and Representative Ellen Story.

Their last steps are to meet with the League of Women Voters in Amherst as a pre- Town Meeting presentation, and then to present at town meeting in May. If the plan is approved,  the name will officially be changed in the town as well.

“We are not turning a blind eye to history. This is a common misconception. Some think we want to turn the lessons from being only from Columbus’s view to only from Native Americans’ point of view. We don’t,” said Atkinson. “We want people to go through a similar process we did, to read both primary and secondary sources, to talk to those around them, and form their own individual opinions.”

Most students at ARHS agree with the group. ARHS students Yasin Cruz and Ashlai Braxton both fully support the change.

“It shows that they understand history. I’m definitely for it. I don’t know how it will play out nationally, but for here, I think it is good,” said Cruz.

“I think it’s easy for people who aren’t Native American to not see why the name Columbus Day is so offensive,” said Braxton. “Indigenous Peoples Day represents the history more. It’s not like Christopher Columbus discovered America. He stole it from the natives.”