The shadow of a 4.0: growing up with an overachiever 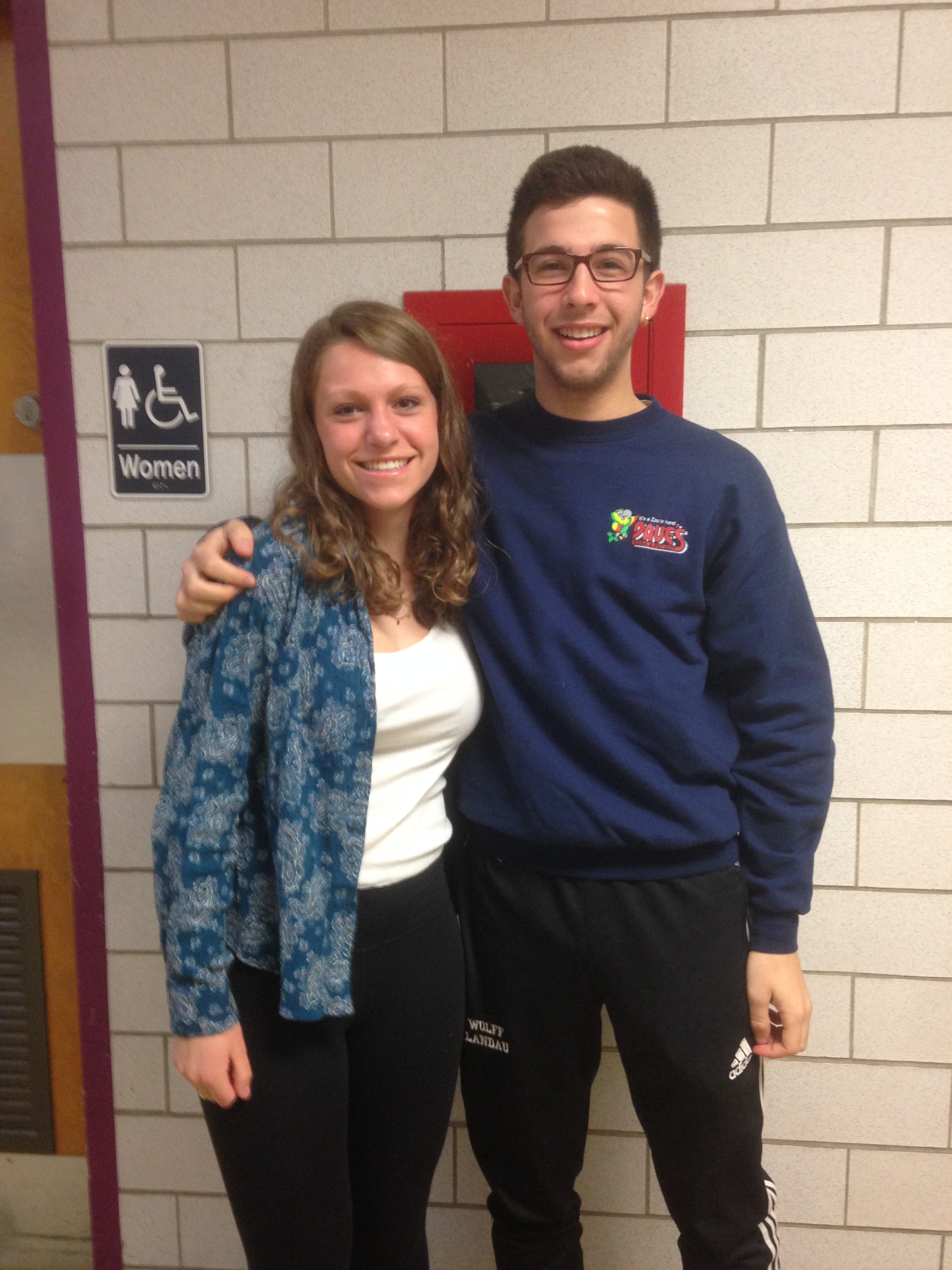 Gina Pryciak and Harry Wolff Landau have felt the pressure of having older “super-siblings.”Photo: Emma Vanderleeden

Every day when I wake up, I walk down the stairs, staring straight at a beautiful painting. I turn into the kitchen to get breakfast and pass a photograph and a drawing. Then I settle down on the couch to eat breakfast under a painting of a hummingbird in motion.

All of this beautiful artwork was made by my older sister when she was in high school.My artwork is less abundant in my house for a few reasons: it is harder to display three-dimensional art,  and I am less prolific. But it is also because my sister is a better artist.

In high school, my sister was a star student and athlete. She got good grades (almost a 4.0), worked hard, and was an outstanding runner.

I was frequently compared to her because I participated in many of the same activities. I ran cross country and indoor track freshman and sophomore year and took many similar classes.

While this was annoying at times, it pushed me in two directions. First, I tried to find my own unique talents or find a personal niche. I also pushed myself to be as good as she was at the things we both did.

Living with a high-achieving older sibling is not uncommon and many ARHS students were eager to talk about its effect on their lives.

Harry Wolff Landau, a junior, was one such person. Harry has a very talented and driven sister, Nina Wolff Landau.

Nina graduated in 2015 with a 4.0. She was a class valedictorian and will attend Brown next year after a gap year. Nina was also an active member in many school clubs and community organizations.

Gina Pryciak, a senior, also has a high-achieving sister. Gina’s sister, Jessalyn (Jess) did not have a 4.0 but not because she couldn’t. Jess did not want to give the valedictorian’s speech so she purposefully got her only A minus in an English class in the spring of her senior year.

Jess was a leader in Environmental Action Club, and did extra projects out of school just for fun. She was a great artist, and played on varsity soccer senior year. Jess is now studying at Cornell.

Ella Kipling Douglas (Kippie) has, not one, but two talented siblings. Satchel Douglas, Kippie’s oldest sibling, graduated from Webb Institute and now has a job designing boats. He was always a smart student and she says he did not have to work hard to get excellent grades.

Kippie’s other sibling, Tulsa Douglas, is a strong student as well, but what set Tulsa apart from the rest was Ultimate Frisbee. Tulsa was on Amherst’s varsity team as a sophomore, frequently competed at the national level, and was named one of the “freshmen of the year” for college Ultimate last year.

All of these older siblings are obviously successful, but it does depend on how you view success. And viewing success often differs from sibling to sibling.

Harry said of his sister that she “wants to do everything better than everyone else.” Harry, however, would rather do “sufficient work with minimal effort.” This, of course, mostly refers to school work but can relate to other things as well.

Nina, he said, always had a strong personal drive to do well in school. Once, Nina was stressed because of an upcoming test. Her parents offered her $100 if she would not study for it and earned lower than a B. She refused. When Harry asked for the same deal his parents would not give it.

Gina thinks that her sister appeared to have an easy time comparing her success to others  with high test scores and grades.

Gina, however, feels that her test scores don’t necessarily tell the whole story and instead, she measures herself by less quantitative things.

Kippie echoed this sentiment. “I view success as a personal thing,” said Kippie. She feels that while what society thinks can be a good measure of success, she would rather just do what makes her the most happy.

Having a high-achieving older sibling can, of course, be hard when people compare you to your sibling; it can feel as though you have large shoes to fill.

Harry said he is not compared very much because he does different activities than his sister, but “sometimes teachers compare us, which is funny.” He does not really feel overshadowed, because his “sister is supportive.” Nina has been known to call Harry “lazy,” but that is just part of who Harry is.

Gina does not like being compared to her sister; she feels she is a totally different person with different strengths and different interests. “I’ve gotten asked a lot ‘Are you going to Cornell?’” said Gina. She finds this annoying because she does not want to go to a big name school and would rather be in a small school with people she likes.

Kippie said she is often compared to her siblings and it is frustrating. When she started playing Ultimate, everyone expected her to be as good as her sister.

Her teachers expect her to be as smart as Satchel and as hard-working as Tulsa. But that’s not who Kippie feels she is and she feels it is unfair to have to live up to those standards just because her siblings did well.

Kippie has recently started taking part in activities her siblings did not.  She joined Ability Plus, a volunteer organization that helps kids with disabilities learn to ski. She also has started auditioning for some theater productions.

Of course, having a talented older sibling is not all bad. There are definitely significant positives that come with it.

The biggest of those is high standard that push the younger sibling to work harder. For Harry, this comes out most in school. Harry has always wanted to prove that he can get good grades, like Nina, without putting in so much effort.

Kippie used her sister’s athletic skill to motivate herself. “My sister was and still is a very good athlete. She pushed me to work hard in training and has made me a better athlete,” she said.

Having a talented older sibling can be hard at times but it can also be positive. It can push you to work harder and find your own strengths. Without our siblings, we would be totally different people than we are.