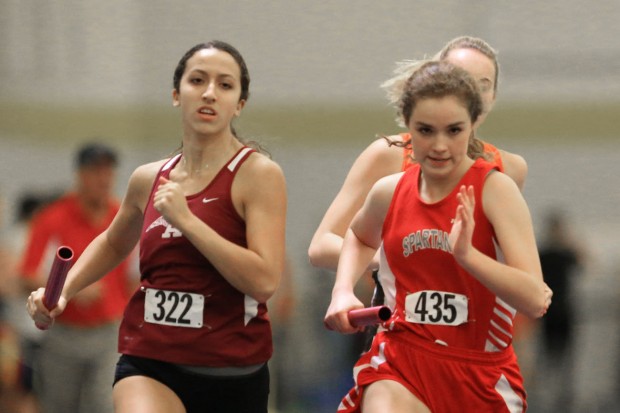 This year they are hoping to keep the streak going.

“We want to hold on to our title,” said Eva Feyre-Febonio.

The team is led by runner Eva Feyre-Febonio, who runs the 300 and 4X400 meter races.

“Pushing yourself to the edge of your capabilities gives you a nice feeling,” said Feyre-Febonio.

The team was off to a shaky start early in December, after they lost their first two match-ups.

“We want everyone to do well and all but we care more about getting many people to qualify for Western Mass,” said Fernanda Breña.

“We already have five qualifications and more on the way,” said Feyre-Febonio.

The team practices 5 days a week from 3:15 to 5, with two or three of their practices including lifting.

They also have a track meet once or twice a week.

“Lifting helps build muscle and is an important part in our workout; it helps you work out muscles that you don’t work-out during running,” said Breña.

There are many racers on the team because there are no cuts; anyone can join. The coach is Melissa McClung.

“The captains of the team are in charge of telling everyone what’s happening,” said Feyre-Febonio, who said they are veterans that have been running since middle school.

Not even snow can hold back the track team. “When it’s snowing, the distance runners still go outside,” said Breña.

“The sprinters sometimes do workouts inside the school,” said Feyre-Febonio.

There is still plenty of time left in the season, and the girls are hoping to claim a title in the end.

No one knows if they will succeed: only time will tell.